For Catalina Samson, a provincial government decision 16 years ago led to a big pay cut and the death of her dream of owning her own home.

At the time she was working two food services jobs, both unionized, one at a nursing home and one at Vancouver General Hospital.

“I was happy at the time,” Samson said. “I was working well. Everything was in place as a worker. I was really setting my goal toward retirement too.”

She’d come to Canada as an immigrant from the Philippines in 1991. She was working hard, she had goals and it seemed possible to realize them. “My dream was to own a place... even a condominium, a place to live in.”

Then, following the 2001 election, the BC Liberal government brought in two bills that upheaved Samson’s life and led to the layoff of some 10,000 other workers like her.

The first, Bill 29, had a stated aim of making it cheaper for health employers and social service agencies to deliver services to the public.

It did that by making it easier to contract out services to companies and removing provisions that protected workers who were laid off.

The other, Bill 94, was intended to “facilitate development and implementation of public-private partnerships in the health sector, enabling improved delivery of cost effective non-clinical services to the public.”

Together the bills opened the gate to a new era of privatization and made it difficult for workers in the sector and their unions to resist.

Earlier this month the NDP government introduced a bill that will repeal both Liberal bills and allow employees in the health-care sector to enjoy the same rights as other workers in the province.

It has received first reading in the legislature but still has a way to go before it becomes law.

Health Minister Adrian Dix said he was proud to be part of a government repealing bills that led to layoffs and contracting out in health care. “Health-care workers have fewer rights and were singled out for special negative treatment.”

In many cases care aides provide the majority of the care for patients, Dix said. The government’s changes damaged that care and the continuity that comes with knowing the people looking after you.

Any savings the public may have gained came at a high price for workers like Samson. She lost both her jobs, but was able to keep working by accepting reduced pay from the new contractors.

“My payment at the time was $18.10,” she said, recalling her hourly wage before the BC Liberal bills. “When we worked through these private contractors it was $10.15 without any benefits... I lost all my benefits. Nothing. No sick time, no vacation, nothing at all.”

“I really didn’t know at that time what to do, but you have to stretch the money that you have. It was like that.”

‘Down to the bottom’

Amanda Chaplin, now 44, is a residential care aide who worked at a long-term care facility in Chilliwack that was one of many across the province to close as a result of the government-enabled restructuring.

“I was the lowest person in seniority,” she said. As workers moved from the closing facility to jobs at Chilliwack General Hospital, there were people with 20 years experience who couldn’t get a position. She had five years.

“Because there was so many people left without positions, there was no work for me,” she said. “I basically lost all my seniority and went down to the bottom.”

At the time Chaplin was a single mom with a little boy, car payments to make and just a few thousand dollars saved towards a down payment for a home. “I started spending my savings and living off my credit cards,” she said.

She retrained and took jobs with construction companies, but there wasn’t enough work to make ends meet. Then she heard from a friend about opportunities in the north of the province.

“I dropped off the five -year-old I could no longer feed at my mom and dad’s house, and I took off for Fort St. John and lived on a friend’s couch,” she remembered. A few months later, when she’d found a job at a care home, she brought her son to join her.

But it was tough to survive. She’d gone almost $30,000 into debt, and after a year of struggling to catch up on paying her bills she declared bankruptcy. That was the bottom, and since then she’s been rebuilding.

The BC Liberal changes to health care made a huge difference to her life, Chaplin said on the phone from Vancouver where she was attending a Hospital Employees’ Union convention.

“It changed my life completely,” she said. “I didn’t know where Fort St. John was. I’d never heard of it. I would have spent my life down here with my family.”

After picking up her son, she didn’t see her parents who live in Hope for a year. She left friends and her social support network.

“It’s completely changed everywhere where my life would have gone,” she said speaking the day after the NDP announced it would repeal the Liberal bills. “The realization of that yesterday, that my life wouldn’t be in the north, completely devastated me.”

Chaplin said life is good for her now. She has recovered financially and met a man she shares her life with. But she would have rather made other choices, she said.

“Life in the north is hard. You have to work and struggle for everything you’ve got. You know, weather. I would not have made that choice for myself. I would never have done that if I could have found a job down here.”

She added, “I would have kept my life right where I was, but somebody else made that choice for me.”

She said she felt grateful, happy and angry when she heard the government is repealing the bills. “It’s a huge step in regaining public control of our health-care system. Right now our health care is being used to make money, not treat people.”

But she remains outraged at how the former government treated people. Aside from what it did to workers, the government seemed not to care about moving seniors from their homes and spreading them around the province, she said.

“It did nothing but hurt people and that hurt never needed to happen. So yes, it made me mad.”

Times have changed and now the system needs to not only retain health-care workers but also attract new ones, Dix said, stressing that he opposed the Liberal bills from the start.

Contracting out will still be allowed, but when that happens workers will have rights and the companies won’t be able to use it as a way to diminish wages, he said. “They won’t be able to essentially lay everybody off and drive down wages, so it will take the wage question out of those negotiations.”

Dix noted that unions challenged former government’s bills and the Supreme Court of Canada found large parts of them contrary to the Canadian Constitution, and yet they remained on the books.

The Hospital Employees’ Union, which with some 49,000 members is the largest union in the sector, welcomed the changes.

“HEU members are jubilant at the announcement,” said Jennifer Whiteside, secretary-business manager for the union. “It’s been a long, long time coming, so it was a very important day not just for HEU members, but frankly for our health-care system as well.”

The former government had an anti-worker, union-busting perspective and set out to drive down wages and working conditions for health-care workers, she said. “It was explicitly intended to break union collective agreements and really try to set up a situation in which our health-care system would be up for the highest bidder.”

Before the BC Liberal changes the system was coherent and stable, she said. A hospital like Royal Columbian, near where she lives in New Westminster, would have had one employer and the workers could operate as a team.

The HEU used to have three main contracts across the province. Now there are close to 100, and the working conditions vary greatly across the sector. “Those pieces of legislation created a very precarious and low-wage sector in our health-care system.”

Private providers, in particular, want to drive down labour costs to increase profits. While there have long been private operators in the sector, before 2001 they met industry standards for wages and benefits, she said, adding that it’s unclear why they wouldn’t be able to now.

There needs to be more scrutiny of the private operators and their contracts with health authorities, she said. “There is a fundamental lack of transparency with regards to the way commercial contracting and procurement happens in the health-care system. I think we need to shine a light on that.”

‘For the younger generation’

Erna Mendoza, 60, has worked for the last eight years as a care aide at a long-term care facility in Campbell River. It was sold four years ago, and then the new owners contracted the services out to another company. There were layoffs, and 80 per cent of the staff ended up leaving, she said.

“At the rehire, we found out that the wages offered were lower and the benefits were lower,” Mendoza said. “I decided to stay because I thought maybe I’ll see what it’s like.”

There were few applicants for the positions, so pretty much anyone who applied got hired, she said, but there were never enough workers available.

“We are still short-staffed,” she said, adding that few workers stay for long. “Although they hire more staff, staff will not stay as soon as they know the wages. It comes with a heavy workload too.”

Before the contracting out there would be two staff on a floor with 38 residents, she remembered, but now during the night there’s just one. 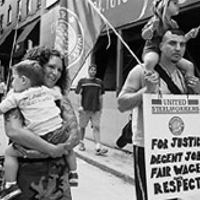 For Samson, the food services worker at Vancouver General, her salary is now $16.85 an hour. Better than it was, but still short of what she was earning in 2001 before the changes.

She’s given up the dream of owning a place to live.

Samson said she was “so happy” when she learned the NDP government had introduced a bill that would repeal bills 29 and 94.

“It took 16 years,” she said. “I was really crying when they informed us about it. There is a hope now.”

At nearly 63, however, she doesn’t anticipate being in the workforce many more years to enjoy the results of the win. “It’s not for us who are already aging. It will be for the younger generation.”