A new British Columbia political party wants to give a stronger voice to rural voters.

And Fraser Valley political scientist Hamish Telford says the Rural BC Party will have a hard time building support, but if it does succeed the BC Liberals will be in real trouble.

“We’ve been talking to lots of folks and kind of the underlying theme we’ve heard from people across rural B.C. is our voices are unheard,” he said. “Our issues never rise to the surface.”

Despite the resource wealth that comes from northern and rural constituencies, not enough money is returned for them to diversify their economies and flourish, he said.

“When we look at lots of small towns across northern and rural B.C., they’re on life support,” Van Barneveld said. “To really get the communities and the region to prosper we need a more active voice, more active promotion of its benefits, and that has to go directly to the legislature.”

Van Barneveld said there was talk of creating such a party ahead of the 2017 election. But the party wasn’t registered with Elections BC until February, and publicly announced Thursday. The only other name publicly associated with the party so far is Darcy Repen, the mayor of Telkwa.

The new party hopes to run candidates in 23 of the province’s 87 ridings. A map on the party’s website shows they include most of the province outside of the Lower Mainland, southern Vancouver Island and Kelowna.

Sixteen of those 23 constituencies are currently held by the BC Liberal Party, while the BC NDP holds seven.

“It’s an interesting development,” said Hamish Telford, a political science professor at the University of the Fraser Valley.

“If it gets some traction and takes five or 10 per cent of the vote, that could make life very difficult for the Liberal Party.”

While the province’s politics have long been polarized, in recent years an urban-rural split has developed. The BC Liberals did relatively well in rural constituencies in the 2017 election.

But in Vancouver-Quilchena MLA Andrew Wilkinson they have since chosen a new leader who Telford characterizes as “urbane.”

The Rural BC Party founders may see an opportunity, particularly with a fall referendum that could see voters opt for a voting system that will give parties a number of seats that better reflects their share of the popular vote, Telford said.

But getting established will be challenging, he said. “It’s extremely difficult to launch a new party.” The BC Green Party worked decades before getting an MLA elected for the first time in 2013, Telford noted. “It’s a monumental task.”

There are 26 parties registered with Elections BC, but only three have members sitting in the legislature, Telford said.

However, B.C. has seen major shifts before and both BC Reform and the BC Conservatives at times have found strong support outside the province’s cities.

“There might be some sentiment for this,” Telford said. “It can happen, if it catches public sentiment... I wouldn’t place much money on it.”

The Rural BC Party’s platform still appears to be under development, Telford said after looking at its website. “I didn’t see any policy ideas, just a basic premise for the party.”

Van Barneveld acknowledged the party is focused on the broad strokes at this point and added that representatives in different constituencies may arrive at independent positions on issues.

There were, however, few specifics. On the recent wildfire season, for instance, Van Barneveld said there will be discussions through the fall on what could have been done better. “We’re going to have to wait for the smoke to clear both literally and figuratively.”

He said he’s personally in favour of developing a liquefied natural gas industry, but was against Enbridge’s Northern Gateway pipeline proposal and said the Trans Mountain pipeline expansion proposal has become complex.

The party would consult with the people directly affected by any project and represent the interests of those communities, he said.

On mining, Van Barneveld said some projects are benign while others are controversial. “It’s very site specific. You can’t broad stroke mining across the province.” 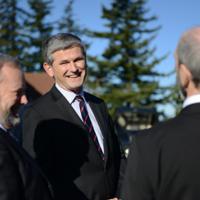 He said consultation with First Nations has to be the first step for any development project rather than the last hurdle, as it often seems to be seen as now.

Van Barneveld said he’s not counting on electoral reform to make winning seats easier for the new party. “I think the Rural BC Party would do well under any electoral system, including the current one.”

He said even electing one MLA would be a success, and he’s optimistic that the party can draw support from across the political spectrum.

“We feel there’s broad support for a party that truly represents rural B.C. and the communities people live in.”

They’ve been signing up members and starting to receive donations, he said.

“People are telling us this is a very good idea and they’re voting for us.”