It took five rounds of counting for Andrew Wilkinson to narrowly defeat Dianne Watts and win the leadership of the BC Liberal Party.

It was a victory of the status quo over renewal for the party, an impression Wilkinson reinforced by using his first remarks to cite the legacies of former BC Liberal premiers Gordon Campbell and Christy Clark.

“Think back to this room in 2001 when Gordon Campbell stepped up here and had a 77 to two victory over the NDP,” he told the cheering crowd in the grand ballroom at the Sheraton Wall Centre in downtown Vancouver. “Think about this room in 2013 when Christy came from behind and wiped out the NDP in this room.”

“That is the heritage we have to build on as a party. That is where we came from and that’s what we have to honour and respect.”

The BC Liberals used a voting system that assigned each of the province’s 87 constituencies 100 points, no matter how many party members. The vote used a ranked ballot and after each round the person with the lowest number of points was dropped and their support was redistributed based on the second, third, fourth and fifth choices their supporters had indicated.

After the first round, former Surrey mayor and Conservative member of parliament Watts led with 2,135 points, or about 24.5 per cent of the support. Wilkinson was in third with 1,591 points, giving him less than 18.3 per cent of the first choice support, behind MLA Michael Lee.

In the final round, less of Lee’s support went to Watts than to Wilkinson, who finished with 4,621 points, or 53.1 per cent of the total.

Wilkinson was born in Australia and moved to B.C. as a child with his family. A Rhodes scholar, he completed degrees in both law and medicine. He was the president of the BC Liberal Party ahead of the 2001 election, and after Campbell won he appointed him as a deputy minister in his office.

In 2013 he won a seat as an MLA in Vancouver-Quilchena, then served in Clark’s cabinet as the minister of technology, innovation and citizen’s services and the minister of advanced education. He was re-elected in 2017 and served briefly as the Attorney General before the NDP and Green MLAs defeated the government.

After winning the leadership, Wilkinson called for party unity based on shared values of enterprise, fiscal responsibility and opportunity. “British Columbia has to remain that shining, guiding beacon that brings people from all over Canada and all over the world to realize their dreams right here in B.C.. That’s why we do this work.”

He said he was looking forward to facing the NDP in the legislature, pushing for a win in the Kelowna-West by-election set for Feb. 14 and opposing changing the voting system in a referendum planned for next fall. 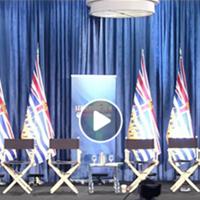 Where Are the Real Liberals in This Leadership Race?

Premier John Horgan offered his congratulations on Twitter. “I look forward to working with the new Leader of the Official Opposition to make life better for British Columbians,” he wrote.

The NDP released a statement from Delta North MLA Ravi Kahlon congratulating Wilkinson on behalf of the party. “Right now, the stakes couldn’t be higher for British Columbians,” he said. “Major challenges — like the dumpster fire at ICBC — still remain. We look forward to working with you on legislation that works for all the people of this great province.”

“One of our caucus’ key priorities in choosing a confidence and supply agreement over a coalition government was to ensure we could work with both parties to advance our shared priorities in the legislature,” he said in a statement. “I look forward to meeting with Andrew to discuss his priorities for the next legislative session and how we can collaborate on areas of common ground.”