The one major certainty regarding the fight between the British Columbia government and its Albertan and federal counterparts regarding Kinder Morgan’s $7.4-billion Trans Mountain pipeline expansion project is that the cross-jurisdictional dispute is unprecedented in Canadian history.

“There hasn’t been a case like this before,” says Sean Kheraj, an associate professor of Canadian and environmental history at York University in Toronto.

The last interprovincial spat over oil distribution occurred four decades ago over Enbridge’s Line 9 when Justin Trudeau’s father, Pierre, was prime minister. The governments of Quebec Liberal Premier Robert Bourassa and Ontario’s Progressive Conservative (PC) Bill Davis raised concerns about the 804-kilometre pipeline to transport Alberta oil from Sarnia, Ont. to Montreal. (Line 9 began operation in 1976, and in the 1990s, was reversed to ship imported oil from Montreal to Sarnia.)

“Neither province objected entirely to the pipeline being built — and the premiers were not directly involved,” Kheraj explains.

In Quebec, Montreal, led at the time by its colourful mayor, Jean Drapeau, was concerned about the environmental impact Line 9 would have, primarily on the city’s water supply. Ontario was worried about the pipeline’s effects on agricultural land in the province.

“A process of negotiation took place and the operator made some concessions, mostly around environmental issues,” Kheraj says.

Back then, and before, there were no court challenges, legislative action, war of words, or threats of punitive measures.

“Of all of the oil pipelines built since the Second World War, there was never a case of a province refusing the passage of a pipeline through its borders,” Kheraj says.

“All of the constitutional questions are untested. There just simply hasn’t been a situation where a province has asserted its sovereign right to resist the construction of infrastructure that passes through its borders. In every other instance, provinces have wanted a pipeline to pass through their territories — except in the case of the Sarnia-Montreal pipeline, which wasn’t a strict refusal, but a desire to have more environmental-impact mitigation added to the planning for the construction and maintenance of the operation.”

It wasn’t always pure harmony. In a move not dissimilar to Alberta’s recently passed Bill 12 — which as Premier Rachel Notley warned would “turn off the taps” of oil flowing to B.C. if the Trans Mountain impasse is not resolved — Alberta, in the Peter Lougheed era, slowed natural gas deliveries to Ontario to protest Pierre Trudeau’s National Energy Program.

Lougheed and Trudeau eventually made peace and, in 1981, signed an agreement on oil and gas prices and revenue-sharing. Whether Notley and Trudeau end up on the same page with B.C. Premier John Horgan over Trans Mountain is becoming less certain.

B.C. is challenging Alberta’s Bill 12 in the courts, and has submitted a reference to its own appellate court to determine whether or not it can regulate increases in the flow of diluted bitumen that crosses its borders. Ottawa, as an intervenor in that case, will argue federal authority regarding interprovincial pipelines that serve the national interest — a position Saskatchewan, which also wants to join the BC Court of Appeal reference, supports too.

B.C. won’t get its answer before the May 31 deadline Kinder Morgan set to receive a federal government assurance that its Trans Mountain project could proceed unimpeded.

The Federal Court of Appeal has also yet to release a ruling on a case launched by seven Indigenous groups challenging Ottawa’s assertion that it properly consulted First Nations. But a decision could be further delayed after the Tsleil-Waututh Nation filed a motion earlier this month asking the court to order the federal government to release uncensored copies of documents cited in a recent National Observer investigation that revealed bureaucrats were ordered to approve the project.

Last month, Trudeau also promised, but has yet to pursue, “legislative options” to “assert” federal jurisdiction over Trans Mountain. But even if he did and introduced legislation — which at this point could not pass Parliament by month’s end — it would not “foreclose First Nations, British Columbia or anyone else from seeking a judicial review of it,” argues Jason MacLean, a former Wall Street corporate and commercial litigator who teaches environmental law and natural resources law at the University of Saskatchewan in Saskatoon.

But he points out that the political logjam concerning Kinder Morgan’s pipeline is not the only constitutional conundrum facing the federal government.

The Saskatchewan government intends to file a reference with the province’s top court challenging the constitutionality of the federal carbon tax, and in so doing, is taking an opposite position to the one it will use in the BC appellate court supporting Ottawa’s jurisdiction over the pipeline.

Ontario PC Leader Doug Ford has vowed to scrap the levy should he become premier after the June 7 provincial election. In Alberta, Jason Kenney is also sour on the tax, and his United Conservative Party is, thus far, expected to replace Notley’s New Democrats as the provincial government when Albertans head to the polls a year from now.

“What is so ironic is that the federal government will defend its carbon tax relying on the doctrine of cooperative federalism, which is how it was designed — to give provinces the ability to tailor the price to their own economies, such as through a tax or a cap-and-trade system,” says MacLean. 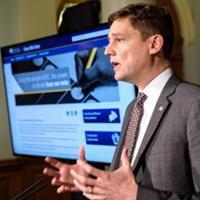 See You in Court, BC Tells Alberta

“The federal government’s argument for its carbon tax against Alberta, Saskatchewan and Ontario is that while it has the authority to impose it, it will do so in a way that’s flexible enough for the provinces to meet their own interests and allow the two jurisdictions to overlap. Yet the federal government is trying to jam a pipeline down B.C.’s throat through unilateral federal action. The contradiction couldn’t be more delicious for a law professor. But those disputes will ultimately have to get settled either in the courts or at the ballot box — or both.”

Last December, the Federal Court provided an answer in Taseko Mines Limited v. Canada (Environment), 2017 FC 1100 — a case in which Taseko Mines Ltd. argued that a federal environmental assessment violated B.C.’s jurisdictional rights in concluding that Taseko’s proposed gold-and-copper mine southwest of Williams Lake would have an adverse environmental impact.

“A project of such magnitude as the one considered in the present case will likely have impacts on areas of both provincial and federal responsibility,” Judge Michael Phelan wrote in his reasons.

The 2012 Canadian Environmental Assessment Act is intended to “promote cooperation and coordinated action between federal and provincial governments,” he said.

MacLean says that if a court can rule that Ottawa also has jurisdiction over a mine located within a province’s borders, “it strains the mind to understand how a major oil pipeline project that has ecological, First Nations and climate-change implications is going to be solely within the federal government’s purview.”