Even as a Victoria-based data company is denying its connections to an international controversy about companies using people’s personal data to manipulate them for political purposes, a former federal Liberal candidate who met many of the main protagonists when they were trying to help her win an election says those connections go back at least a decade.

“It’s a small world,” said Briony Penn, who ran as a federal Liberal candidate in 2008 for Saanich-Gulf Islands in a contest remembered for its dirty tricks. “People don’t realize it’s a very small elite little crowd that’s manipulating voters all over the world.”

A statement on AggregateIQ’s website tells a very selective story about its connections. The March 24 statement appeared after media stories last week about revelations from Chris Wylie, a data scientist from Victoria who described how he helped SCL Group and its offshoot company Cambridge Analytica gain access to the personal data of 50 million Facebook users and connect it to their psychological profiles.

Cambridge Analytica worked on Donald Trump’s presidential campaign while AggregateIQ gained notoriety for its work for the leave side which narrowly won the 2016 Brexit referendum.

Wylie had been the research director at SCL and has been quoted saying that while the companies were separate, they worked so closely that people at SCL referred to AggregateIQ as its Canadian department. The companies shared the same underlying technology, he has said.

SCL Group describes itself on its website as “the global leader in data-driven communications.” The private firm specializes in data mining and data analysis, using the results to target key audiences in hopes of modifying their behaviours. According to its website it has done work for governments and military organizations around the world and has worked to influence elections in 19 countries, including Italy, India, South Africa, Colombia, Indonesia, Thailand and the United Kingdom.

While AggregateIQ’s statement says it never entered into a contract with Cambridge Analytica, it’s been on the public record that it did have a relationship with Cambridge’s parent company SCL since The Tyee reported it more than a year ago.

“We sub-contracted work to them, such as software development and digital marketing (before we built up our own in-house capacity in these areas),” an SCL spokesman told The Tyee via email in March 2017. “They also acted as a local point-of-contact in Canada for SCL. That business relationship ended and we haven’t worked with them for quite a while.”

Until February 2017, SCL had listed a Canadian office in Victoria, the phone number for which was answered by Zack Massingham, AggregateIQ’s CEO, even after the listing had been removed from SCL’s website.

“It was recently brought to our attention that their contact details were still on the website so we updated the page by removing them,” the SCL spokesman said a year ago. “SCL/Cambridge Analytica had no involvement whatsoever with their reported work with the Vote Leave campaign.”

For Massingham’s part, he said AggregateIQ had done work for SCL in the past, but the relationship had ended. “I don’t know why they recently had us listed as one of their worldwide offices, but other than the work we had done in the past, we do not have any current business with them,” he said at the time.

Jeff Silvester, AggregateIQ’s chief operating officer, did not respond to The Tyee’s request for comment this week.

Former Liberal candidate Penn said Wylie, who would have been 18 years old at the time, volunteered on her campaign. “He was around. I don’t even know exactly what he did,” she said.

Ray Larson, who was the communications director on Penn’s campaign, later went to London to work for SCL with Wylie.

Silvester was the executive assistant to Keith Martin, the Liberal incumbent in 2008 in a neighbouring riding, and Penn remembers him working closely to support her campaign.

“I can’t believe they didn’t know each other very well,” Penn said. “They were all milling around... I don’t blame any of these people for what they’re doing. They’re just making a living. The crime is we don’t have any regulations.”

Penn’s campaign manager in 2008 was Kit Spence, who along with strategist Brad Zubyk had worked in the Ukraine for Viktor Yanukovych and his pro-Russian Party of Regions. Also advising Yanukovych’s campaign was Paul Manafort, who would later become Trump’s campaign chair.

On Tuesday, Wylie told a British parliament committee that he “absolutely” believed AggregateIQ used Cambridge Analytica’s databases in its work during the Brexit referendum. According to the Associated Press’s report, Wylie said AggregateIQ “can do virtually everything that [Cambridge Analytica] can do but with a different billing name.” 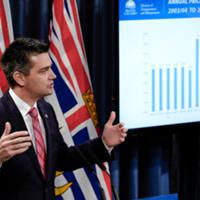 Reports Monday alleged that leave supporters had circumvented spending limits by co-ordinating more than one group to spend money on targeted advertising with AggregateIQ.

The statement on AggregateIQ’s website says, “All work AggregateIQ does for each client is kept separate from every other client.” It also says it is and has always been Canadian owned and operated. “AggregateIQ works in full compliance within all legal and regulatory requirements in all jurisdictions where it operates. It has never knowingly been involved in any illegal activity.”

Penn lost in the 2008 election to Conservative Gary Lunn, but there were lingering questions about strange automated phone calls and the co-ordination of third party advertisers.

“I see in one little place the breeding ground for an issue of international proportions,” Penn said. “If you’re a professional political operative, in 2008 you saw how easy it was to use analytics and crude tools to interfere with an election.

The experience in 2008 showed the need for stronger laws to protect democracy, Penn said. “Nobody in Ottawa’s been listening. It’s partly because everyone realizes it’s an arms race and they’ve all got to play the game.”