The British Columbia Utilities Commission is delaying its decision on a BC Hydro rate freeze so that it can hear arguments regarding comments Premier John Horgan made in response to a Tyee question last week.

“Hydro’s argument in favour of the rate freeze was it was a matter of government policy to ask for a rate freeze,” said Bill Andrews, counsel for the Sierra Club BC and the BC Sustainable Energy Association, two groups that intervened in the BCUC process to oppose the rate freeze.

“Now the premier is quoted as saying something regarding the rate freeze, so I guess the commission wants to know what Hydro thinks of it,” he said.

During last year’s election, the NDP ran on a platform that included a rate freeze for all BC Hydro customers.

In November, at the provincial government’s request, BC Hydro amended its application for a three per cent rate increase that was already in front of the BCUC to instead ask for a rate freeze.

In its arguments, the Crown utility cited Horgan’s mandate letter to Energy, Mines and Petroleum Resources Minister Michelle Mungall and said the BCUC in making its decision should give weight to the fact the freeze is government policy. 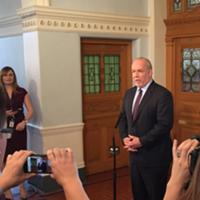 The BCUC had finished hearing arguments from BC Hydro and interveners Friday, but on Monday extended its process to Jan. 30 so it could hear arguments regarding comments Horgan made to reporters last week.

“I am now more convinced than ever that the better course of action on affordability is not blanket reductions or freezes, but targeted to those who can best benefit from relief in this area,” Horgan said Jan. 16.

“For those who are seeing a significant increase in their hydro bills, if they can’t find power-smart ways to reduce those costs, then perhaps relief from the utility or from the province is the way to do that, and I’ve directed the [BC Hydro] board chair to take a look at that.”

Horgan left Saturday for a 10-day mission to China, South Korea and Japan.

“We don’t see why there would be any need for further hearings as the government’s position has not changed,” a spokesperson for the premier said in an email. “We directed BC Hydro to apply for a 0 per cent increase for 2018 and that is still what we are seeking. That application is before the commission.”

A media contact for the BCUC did not respond by publication time.