In three days, it has been shared almost 13,000 times by readers who identified with Barrett’s story of struggling to survive in a city where even two-income couples can barely pay for substandard housing and the city’s charm is lost in the exhausting battle of daily life.

Barrett decided to abandon the city — and a great job — after 15 years, and start again in Calgary.

“Truthfully there was no contest — it was the city or my sanity,” she wrote. “My sanity won.”

Our readers shared similar stories in the comments on the article — more than 465 by Thursday — and on social media.

Kai Nagata of the activist organization Dogwood tweeted his response.

“Jessica’s farewell letter has me wondering how much longer I can hang on,” he wrote. “My girlfriend has a 2-yr-old, I have a dog, and I just found out my landlord wants to sell. I don’t know if I can stomach the house hunt. My family’s lived in Vancouver since 1900, apart from 1942-64 on my dad’s side, when they were interned and then lived in the Interior.”

“There is no other “home” for me,” he tweeted. “We’re from Vancouver. But I don’t know how I can stay. Connection to place, and community, is what makes us human. Allowing capital to unroot people from their home is incredibly dangerous. I don’t have any grand conclusions to offer. It sucks. I’m sad to lose @jm_barrett. The rest of us will just hold on for as long as we can.”

Globe and Mail writer Gary Mason devoted a column to Barrett’s piece, calling it “profound, heartbreaking and sadly all too true.”

In our comments section, Hilary had a similar response. (Commenters need not use their own names.)

“Thanks for the great article, Jessica! I can relate all too well. We were lucky enough to get ‘grandfathered’ into an affordable rental five years ago, but when our landlord sells (likely within a couple of years), we will be faced with the same dilemma: move to the distant suburbs (not realistic as I don't drive) or pull up our roots and start all over again somewhere we can earn enough to live decently. I have been here since 1998 and have witnessed the changes you describe. Very disheartening. Vancouver has sold its soul. Unfortunately many other cities are following the same road to hell paved with ‘good intentions.’”

And it was not just young people who shared similar stories. Long-term residents, like Relic 57, reported the same pressures and fears.

“I live in maybe the last affordable apartment in all Vancouver,” he wrote. “Immediately next to me a rental tower is under construction on the site of a demolished heritage building. Across the street, another tower is being finished off. My own building has been sold twice in one year, purely for speculation, with the intent it gets assembled with other lots for yet another development. The lowest rent in these new buildings is three times what I pay now.

“Being an older guy with a not terribly lucrative career in the arts, I work an increasing number of precarious schmuck jobs for minimum wage. One time, as we were deep inside a trailer unloading maybe the thousandth or ten thousandth crate of instant noodles, my co-worker was frantically taking calls on his mobile to line up yet another temp job for another trailer to help pay off his $1,500 rent. That’s Vancouver today.”

Life is reduced to surviving, he wrote.

“Whereas in the country and generation I was born to the aim of life was to have a full and meaningful one, it is now reduced, in this city at least, to a perpetual, gnawing, endless anxiety about meeting the rent and one overblown and senseless expense after another. When do you see friends? Read a book, take a class, pursue an interest, save for travel? This has been choked out of existence for so many people.

“Since it is virtually certain I will be turfed out of my cheap walk-up within a year or two, the prospects are not great. Either score a subsidized cubbyhole somewhere — a long shot — or actually move to another city, at the age of 60, with very little means to support myself in doing so. At least I’ll have a good excuse to get out of this superficial, overblown piece of Tupperware — been meaning to for years — but no one at any age should be displaced from their homes.”

And, some readers noted, the city loses its vibrancy as people like Barrett chose to leave.

“For anyone considering moving here to Vancouver, please read this article,” Tom wrote in the Tyee comments. “I have lived here for many years now, and in my opinion, this city has lost its soul. I am fortunate to have bought a house a long time ago when they were cheap as borsch, but even though I do not have any housing affordability issues, I feel for my fellow Vancouverites stranded in the rental market and finding life difficult. This young lady is a great loss for Vancouver and we have lost and will lose many more vibrant and energetic people like her… sad really”

“This is the great missed opportunity of Vancouver, the young professionals. It is appalling that a generation has been effectively shut out of home ownership, barring an almost complete sacrifice of lifestyle,” he wrote. “We haven’t even bothered to make sure they could stay as renters.

“The failure to provide publicly owned non-market rental housing geared to local incomes will be the end of livability in this city. When teachers, firemen, and health care professionals cannot live in the city, it’s not just a commuting issue. It’s a loss of the social fabric of the city… We will lose the entertainment, food and cultural businesses that rely on young adults, the city will be less vibrant and less interesting. It’s not pretty looking in the mirror right now.”

The experiences and amenities that made Vancouver so attractive in the first place will be lost as people are forced to move away, wrote Susan.

“There are many advantages to living in a city. But if a city ceases to be affordable to students, cooks, cleaners, waitresses, bartenders, artists, and all the people who make a city HAPPEN that city will soon lose all the best parts of being a city. Imagine the city without restaurants, nightclubs, bars, museums, functioning public transit, dance classes, musical events, art shows, etc., etc., because the people who do those jobs can no longer afford to live in the city or near enough to the city to make those jobs financially feasible for them. NOT a good choice for Vancouver.”

Positively4thstreet said life in the city has been steadily growing worse, except for the very rich.

“I left around 1980 and came back just after Expo. It’s been downhill and depressing ever since. It’s a delusional city that keeps bragging about itself when there's nothing here. I think of it as a huge parasite anymore that sucks everything out of you and doesn’t really have much left to give. Summed up nicely in your paying $1,700 a month for that shed you lived in. That’s totally symbolic of Vancouver today. Expo was the beginning of the end for the once really great city for people Vancouver was. Sold the city to the global elite.”

“After living in Vancouver for 18 years, a combination of circumstances dictated to me that I had to move in 2010. Before I left, most of my friends and acquaintances (many in the arts) had already left Vancouver in the previous five years. Some have characterized this as an exodus, and that may be accurate. I’ve been back visiting a few times, but am less and less motivated to even go back to visit. People in Vancouver seem exhausted, tired and cranky, working so hard at menial jobs just to live in a dilapidated shared house with 10 other people. The politicians sold out the city to wealthy foreigners, and whatever character was once Vancouver's ‘soul’ has been destroyed.” 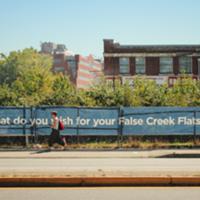 “The current moment reminds me of what had happened to New York City by the 1970s: nurses, firefighters, etc., lived 60-90 minutes away in surrounding communities,” he wrote. “There followed a very bleak period before the elite grew large and rich enough that ordinary people were almost entirely pushed out of the remaining low-rent areas by gentrification, such that Manhattan is now inhabited pretty much exclusively by the very rich, the very poor, students in dorms, and a few elderly middle-class people in rent-controlled apartments. The logic of unfettered real-estate capitalism suggests that Vancouver is on the same trajectory.”

And some commenters supported Barrett’s decision to leave.

“Love this!! So sad but true,” commented cespeirs. “You need to get out of Vancouver to see that life is so much better elsewhere. OK, maybe not as beautiful, but beauty doesn’t make up for all the stress that average Vancouverites feel just trying to get by each day… When I visit Vancouver now, I do sense hostility in the air. It's not the happy place I moved to in 2000.”

“After reading your piece, any suppressed longing to wake up to the view of the mountains, and salt in the air…has dissolved,” wrote Cloudburst. “I would not want to witness the life blood drain out of what has remained of Vancouver. We must plant trees where we are, and create new blossom-canopied streets, new fairy tales…”