The Union of BC Municipalities shouldn’t be allowing the Chinese government to host a cocktail reception for local politicians as part of its convention this month, Dermod Travis of IntegrityBC said Tuesday.

The cocktail reception hosted by the Chinese Consulate-General is inappropriate and the UBCM should have said no, Travis said.

The Chinese government isn’t hosting the event for mayors and councillors from across the province because “they’re just a bunch of swell guys,” he said. The goal is to forge relationships so city councillors will feel a loyalty or in some way indebted to Chinese officials, he said, which may influence their future decision-making.

“It’s highly irregular and inappropriate that a foreign government should be hosting any type of function such as this, which will have the impact of influencing potential decisions at the local government level,” Travis said. The concern would apply to any foreign government, he noted.

“It’s a slippery slope from a quiet chat at a UBCM reception to something that might be a little more extravagant, such as a private dinner,” Travis said. “It can continue to escalate and has the potential to impact the impartiality of what should be local decisions which may have an impact on the interests of the government of China.”

The union executive has no reason to foresee issues stemming from the reception, the sixth hosted by the Chinese Consulate-General, Krause said.

“Nothing has been raised to us,” he told The Tyee, “certainly if there was we would have to look at this.”

The Sept. 27 reception in Vancouver is officially hosted by the Chinese Consulate-General.

But one of the email addresses of the organizers provided to The Tyee is linked to the Chinese People’s Institute of Foreign Affairs.

He also noted the institute’s involvement comes as Canada moves toward free trade talks with China, which polls suggest many Canadians oppose.

“It suggests an agenda and an intention,” Mulroney told The Tyee. “Maybe they’re reading the polling and want to counter negative perceptions.”

The institute, based in Beijing, boasts of the involvement of a number of former high-profile Chinese government officials and ambassadors. Its current president is former ambassador to the European Union Wu Hailong. Wu met with the new Canadian ambassador to China John McCallum Tuesday.

The UBCM could not confirm if the institute is involved in organizing the reception. Neither the consulate nor the institute responded to The Tyee’s attempts to ask questions about the event.

Mulroney said the event is “above board” and contact between Chinese diplomats and local elected officials can be useful. He said what worries him more are private meetings with local politicians that aren’t disclosed.

In the past concerns have been raised by Canada’s security experts about Beijing officials’ attempts to influence Canadian politicians.

In 2010 the Canadian Security Intelligence Service issued a warning that five foreign governments, including China, were using espionage schemes to infiltrate and influence Canadian governments.

In a CBC News interview, Richard Fadden, then the head of CSIS, raised concerns that were more specific.

“There are several municipal politicians in British Columbia and in at least two provinces there are ministers of the Crown who we think are under at least the general influence of a foreign government,” he said.

Krause said UBCM members who attend the reception are mostly interested in economic development opportunities for their regions.

“We want to do things of interest to our members, if there was no interest our members wouldn’t attend,” he said. “They have had participation.”

No other nations have hosted such receptions at the UBCM convention, a spokesperson said.

Krause said he hasn’t attended any of the past receptions himself, suggesting UBCM past-president Al Richmond, an area director on the Cariboo Regional District, could provide more information.

Richmond has been involved in China-focused initiatives in the Cariboo region, including trips to China to promote the area. 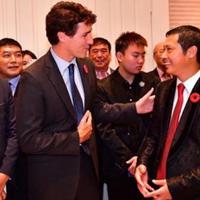 He declined an interview with The Tyee.

Travis said the mixers are used to find politicians who can help advance Beijing’s interests.

“They’re interested in trying to figure who are their friends on local councils,” he said. “What better way to find out than to invite them all over for free drinks and canapés?”

In 2012, when a Chinese mining company wanted to import its own workers for a B.C. coal mine near Tumbler Ridge, local politicians supported the company.

The mayor even cut the ribbon on the project despite protests from unions representing miners in the region.

In Ontario, concerns have been raised about Niagara Falls Mayor Jim Diodati’s support for a real estate development backed by CITIC Group, the real estate arm of the Chinese government.