In a letter submitted to the B.C. Utilities Commission, which is currently reviewing the $8.8-billion project, Harcourt said Site C will “severely damage BC Hydro and B.C. credit ratings” and lead to increases for ratepayers across the province.

Harcourt, who first voiced opposition against Site C in late 2016, said a recent study from Oxford University that found worldwide hydro projects see average cost overruns of 90 per cent should be a warning to B.C.

“What a coincidence both recent BC Hydro transmission lines have recently seen 90 per cent cost overruns,” Harcourt wrote to the commission.

Despite multiple requests and Freedom of Information submissions, DeSmog Canada has been unable to obtain an updated budget for Site C from BC Hydro.

In a sit down interview with DeSmog Canada last fall, Harcourt said it is never too late to stop a bad project from going ahead.

In the 1960s, when Harcourt was a lawyer representing the Chinese community in Vancouver’s Chinatown and Strathcona, the province cancelled plans to build an eight-lane freeway along Stanley Park.

“We stopped it cold,” Harcourt said, “that last part of that really bad idea.”

He added $200 million had already been pumped into construction of the freeways but stopping the project allowed Vancouver to become the city it is today, celebrated for its parks, walkable waterfronts and sustainability rankings.

“Proponents say it is too late, too expensive to cancel Site C because $1.5 billion has been spent,” Harcourt wrote to the commission. “I say it is better to cut losses.” 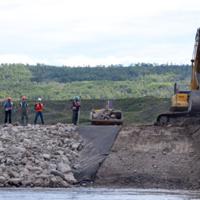 Harcourt points to an April 2017 report from the UBC Program on Water Governance that found cancelling the project could save B.C. between $500 million and $1.65 billion.

Harcourt’s letter follows on the heels of a submission by former BC Hydro CEO Marc Eliesen who called for an immediate and permanent halt to Site C.

The decision to proceed with Site C, despite a clear need for the electricity it would produce and despite a failure to explore cheaper, less environmentally destructive alternatives, was “reckless and irresponsible,” Eliesen, who was at the helm of BC Hydro from 1992 to 1994, told the commission.

The BCUC has until September 20 to release a preliminary report and will make a final recommendation on the project on or before November 1.