The request to the Canada Mortgage and Housing Corporation (CMHC) came from BC Housing CEO Shayne Ramsay a few weeks before the province announced a program giving interest-free loans of up to $37,500 to first-time buyers of homes worth up to $750,000, according to records released in response to a federal access to information request.

CMHC provides insurance that guarantees mortgage lenders they will be paid. Buyers with larger down payments pay lower insurance rates.

The provincial government wanted its loan to be counted as part of a down payment.

“We are asking CMHC to treat assistance under our down payment assistance program as it treats traditional down payments and not charge higher than normal premiums,” Ramsay wrote in a Nov. 23, 2016, email to Evan Siddall, CEO of the Canada Mortgage and Housing Corporation.

The province also wanted to be able to transfer the loans to the buyers’ first mortgages after five years, contrary to CMHC policy.

“Our program was premised on the assumption that the no interest, no payment second mortgage assistance provided by BC could be rolled into the first insured mortgage at renewal typically after the 5th year,” Ramsay wrote. “We would ask that CMHC make an exception for the BC down payment assistance program and permit these refinancings.”

In a note to CMHC colleagues, Siddall was clear on how to respond. “The answer is going to be no but I need to escalate this,” he wrote. “Of course we won’t waive fees.”

“It should be relatively easy for us to say ‘no.’ They have not put forward a reason or an argument as to why we should waive our normal requirements,” he said. “In the absence of a reason (that mitigates the risks created by the program) we should decline.”

In a draft response to Ramsay, Siddall wrote that the mortgage rules are designed to give buyers an incentive to increase the amount of equity they have in their homes, thus reducing the risk of defaults. 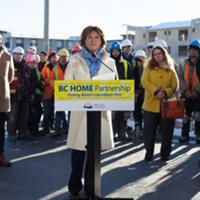 “Given our published concerns about house price values in Vancouver, BC would not be at the front of the line as a candidate for an exception,” he wrote. “Regardless, I don’t see us granting regional exceptions. Since other provinces will insist on equal treatment, that’s tantamount to changing our policies and practices nationally.”

Programs that encourage demand will push home prices higher, the CMHC response said. “I would therefore urge you to reconsider policies that lure the most vulnerable Canadians into increasing their exposure to the Vancouver housing market.”

Despite the CMHC’s concerns and refusal to make exceptions to mortgage rules, B.C. proceeded with the program, announcing it on Dec. 15. At the time, the CMHC’s public comments expressed concern about the program without directly condemning it.

The Tyee reported in May that Siddall wrote to a BC Housing official a few days after the announcement saying, “You will know we are holding our noses firmly on this and I would not want any other [provinces and territories] to be misled into thinking this ill-advised program represents good public policy.”

The NDP, which opposed the program when BC Liberal Premier Christy Clark announced it, will be sworn in as government on July 18.