Unabashedly progressive policies and a shift to proportional representation are keys to keeping the federal New Democrats from being abandoned by strategic voters, party leadership candidates said Thursday in a Toronto debate.

The debate, hosted by the United Steelworkers Union, featured questions on protecting pensions, the future for resource workers and retirement incomes — and strategic voting.

The NDP’s slump in the 2015 election, when it went from leading in pre-election polls to winning just 44 seats, has been blamed on voters who supported party policies but decided that voting for Justin Trudeau’s Liberals was the best way to oust Stephen Harper.

Manitoba MP Niki Ashton said the party must stop making mistakes like allowing the Liberals to “out left” the New Democrats during election campaigns and “wandering away” from the party’s principles.

Ashton said the party’s core message should be that anyone who considers themselves progressive should vote for the NDP.

New Westminster-Burnaby MP Peter Julian echoed her sentiments, saying the party needs to present bold visions and policies on issues like the environment and electoral reform.

Prime Minister Justin Trudeau promised electoral reform during the campaign, saying the 2015 election would be the last one based on the current first-past-the-post system. But he reneged on the commitment this year.

Julian said that the NDP needs to continue to push for proportional representation, which would eliminate the need for strategic voting.

Singh, a late entrant to the race who is now considered a front-runner, has called for an end to universal old age pensions. He proposes merging retirement and seniors’ benefits into one program with payments going to those with the lowest incomes.

Caron went on the attack.

Singh defended his position, saying his plan will help lift people out of poverty and eliminate tax breaks for those who don’t need them.

Another question raised the critical issue of the NDP’s approach to balancing environmental protection and climate policy against the importance of jobs for unionized workers in the resource sector.

Timmins-James Bay MP Charlie Angus criticized the federal government for not investing in retraining workers when resource economies slump, like the Alberta oil and gas industry since prices collapsed in 2014.

“In the time of a bust that’s when you put the re-investment in,” Angus said. 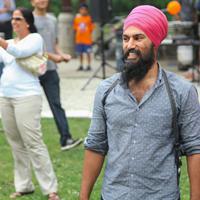 Trade and protectionism also emerged as a debate issue. The five leadership hopefuls were asked if the federal government should implement a “buy Canadian” policy, giving preference to businesses in this country.

All the candidates agreed that pension rules need to be changed to protect employees when close or lay off workers.

Caron said pensioners need to make the first people on the list of creditors when a company files for bankruptcy.

The NDP will select a leader to replace Tom Mulcair in October, through mail and online voting.