Like a broken record, the usual suspects have come out of the woodwork, demanding Tom Mulcair resign as leader of the New Democratic Party. Those on the left who spent the entire 2015 federal election campaign promoting strategic voting are simply trying to shift any responsibility away from their own culpability. 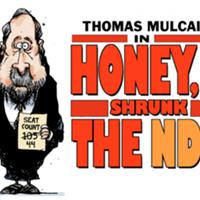 If Mulcair Survives Next Week's Review, the NDP Is Doomed

Some say Tom's balanced budget issue did us in. But imagine what the reaction would have been had the NDP campaigned for any deficit, let alone one that looks like it will be $30 billion when the books close.

While there are many other "should haves" and "would haves" related to the campaign, they are not the real issue for the upcoming NDP convention. Too many prominent New Democrats and affiliated organizations in the election, through their actions and words, told voters "this time it's OK to vote Liberal." I saw as many if not more "Stop Harper" signs as I did "Vote NDP" signs.

It was a tragic mistake for our party and its supporters, and it became the dominant theme in the election. The result? Both the soft right and the "anybody-but-Harper" soft New Democrats voted Liberal.

You need only take a look at Quebec, Atlantic Canada and Toronto to see the effect of these voting patterns. They didn't happen because of a balanced budget promise, or the niqab, or even sunny ways.

They happened because the soft votes on both sides went Liberal, aided and abetted by the strategic voting crowd. As an aside, I don't recall hearing any Liberals advocating "strategic" voting for New Democrats, but I digress.

It's quite entertaining to watch these so-called New Democrats patting themselves on the back, taking credit for getting rid of the Harper Conservatives while in the same breath solely blaming the leader for the NDP's poor showing.

These same folks did the same thing in Ontario in 2014 -- loudly boasting about their success in stopping Conservative Tim Hudak, while simultaneously leveling at Andrea Horvath the same criticism they now level at Tom Mulcair.

With part-time friends and sometime supporters like these, the NDP needs no enemies. Telling NDP members to vote for other parties will never make a solid roadbed we can pave to power.

Perhaps Mulcair in Edmonton this week ought to quote Julius Caesar to all those advocates of this "strategic" part-time loyalty to our party, calling for his head: "Et tu, Brute?"