Days before facing an expected defeat in the British Columbia legislature, the government has said it’s ready to end a decade-long freeze on welfare rates.

“What you’re really seeing here is what we heard during the election,” said Social Development and Social Innovation minister Michelle Stilwell. “We heard from people they wanted to see more changes in the social programs that we have in our government.”

The government has made small increases to disability payments in the last two years, but has not raised regular social assistance for people who are expected to work since 2007. A single person who the government considers employable receives $610 a month.

During the campaign ahead of the May 9 election, the NDP promised to raise welfare rates by $100 a month.

The NDP won 41 seats in the legislature and the BC Green Party three. They have said they will use their combined 44 seats to defeat the BC Liberals, who received 43.

The legislature is to return on June 22 for a throne speech, which will reportedly include a $100-a-month raise to welfare payments, indexing disability payments so that they rise with inflation, and expanding programs to help assistance recipients find employment.

Jean Swanson, an advocate in the Downtown Eastside of Vancouver for the Raise the Rates coalition, has for many years called for higher welfare rates.

“They wouldn’t increase the rates for 10 years to help people who were poor, but now when Christy Clark needs to raise them to keep her job they increase them,” she said. “It’s pretty disgusting.”

The proposed $100 raise is “not nearly enough,” she said.

Demands posted on Raise the Rates’ website include increasing payments to about $1,500 a month for single people on regular welfare to match Statistics Canada’s Market Basket Measure of what it costs to live in the province. 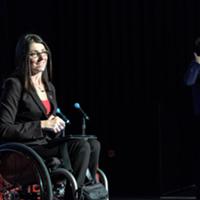 Asked for her thoughts on neither the NDP nor the Liberals promising more than a $100-a-month increase, Swanson said, “It’s disappointing and it’s heartbreaking and it’s actually life threatening. It’s so low people can’t afford to pay rent, so they’re homeless.”

There are both humanitarian and financial reasons to end the austerity on welfare, Swanson said. Citing work from the Canadian Centre for Policy Alternatives, she said, “It’s cheaper to end poverty than to maintain it.”

Stilwell, who said she didn’t have a figure for what the proposed changes would cost, has in the past said that increases to welfare rates would only be made when the province could afford them.

She said she was unsure if the increases she was promising would be made in September or January, but that they could be afforded within existing budgets.

A government communications contact later sent an email saying the raise would cost about $53 million a year and that a two-year pilot expanding work programs for 2,000 single parents would cost $31.8 million.

“We’re not changing who we are or what we stand for or what our core values are,” Stilwell said. “We will continue to push towards always ensuring there’s that strong growing economy so we can provide those programs and services to the people of British Columbia and ensure they have access and opportunities to employment because we certainly know, and it’s been demonstrated, that the best form of support is a good-paying job.”

Stilwell said she has had three surgeries in the last six weeks, but she is healing well and will be in the legislature for Thursday’s speech and any votes. “It is going to be a challenge, but I’m not going to miss it.”

Various commenters on Twitter dismissed the BC Liberals’ proposed raise.

“Cynical opportunism,” wrote Maria Dobrinskaya, the acting BC director of the Broadbent Institute and the chair of the board of directors of Vision Vancouver, the municipal political party. “They care about power, not people.”

Brenton Walters‏, a communications consultant who has been involved in NDP and Vision Vancouver politics, wrote, “So desperate to cling to power. What absolute garbage. Opportunistic bullshit from this group.”

Trish Garner, a community organizer with the B.C. Poverty Reduction Coalition, said her organization asked the parties during the election campaign about their plans for welfare rates, but got no indication from the BC Liberals that they would consider raising them.

“They’ve had no interest,” Garner said. Both the Greens and NDP had better platforms for poverty reduction, she said. “[This is] too little too late it seems from the Liberals.”

The government also needs to take a more comprehensive approach that includes creating more social housing to help the many people who are struggling to afford high rents, she said.