The results are in from Canada’s first youth homelessness count, and they aren’t good.

Almost 130 youth in Kamloops experienced homelessness sometime in 2016, with more than 50 homeless when the survey was conducted in October.

But the organization behind the survey believes the data will help strengthen services to keep young people from becoming homeless and provide housing.

The results, released last week, showed 129 youth between 13 and 24 had experienced homelessness within the previous year. Fifty-six of those youth were homeless when the survey was conducted. Half of them were considered “hidden homeless” — sleeping on couches or floors — while a third slept outside.

“The most shocking part for me was that we identified 19 youth were sleeping rough,” said Katherine McParland, United Way Kamloops’ youth homelessness manager and co-chair of the city’s A Way Home Committee to End Youth Homelessness.

“In previous years the [adult] point in time count only showed a handful of youth, so I think it really shows how much the problem was underestimated,” she said.

A coalition of 120 non-profits, businesses, and local, provincial, and Indigenous governments, the A Way Home committee designed and conducted the weeklong count using the Homeless Hub toolkit for conducting youth homeless counts.

The count included multiple surveying methods. Youth-specific questions were added to the adult homelessness count that was happening simultaneously; homeless youth-friendly events were held where food, services, and even a safe place to sleep were provided; and the committee partnered with the school district to survey youth online.

The results also helped confirm what many youth homelessness researchers have found in other jurisdictions, including the overrepresentation of Indigenous youth (more than half of the 129 youth). The survey also found more than half the youth who experienced homelessness had been in foster care, and 25 per cent had aged out of care when they turned 19. Lesbian, gay, bisexual, queer, transgender or two-spirited youth made up 18 per cent of the total.

Almost half the youth had spent six months or less homeless, but 16 per cent spent one to five years without a home.

Almost three-quarters of the youth who were homeless when the survey was done were 19 or older, while over half identified as male.

The reasons for homelessness varied, but the two major reasons youth reported were family conflict or abuse, and addictions or substance use — either their own or someone else’s.

The results point to the need for homelessness prevention supports, McParland said. “So connecting [youth] to community, culture, family, and really acting like family.”

The A Way Home committee plans to use the results to develop recommendations for ending youth homelessness in the community, and has already sent the results to the Ministry of Children and Family Development and B.C.’s Representative for Children and Youth.

But McParland already knows their number one recommendation will be a “safe suite” for four to six of the hardest to house youth, with no barriers and 24/7 staffing and support, where they can stabilize before moving into more permanent housing. 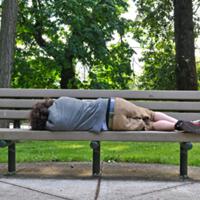 Young, Homeless, and at Risk in BC’s Interior

A Way Home has a housing “wrap force,” which works to find youth housing and supports. But they were unable to house 82 youth referred to them last year because there was no safe suite to provide immediate low-barrier, transitional housing with round-the-clock staffing. The committee estimates safe suite staffing and supplies would cost $411,100 annually.

“There’s not enough support: the staff go home, [the youth] don’t have the life skills to be independent. They really need a safe cocoon to help them leave the streets behind, and build that bridge from homelessness into housing,” she said.

Despite roadblocks like the lack of safe suite beds, McParland is optimistic they will end chronic youth homelessness in Kamloops, particularly now they are armed with more information about what drives youth out of their homes, and what could help them stay.

Kamloops has a population of about 90,000. If youth homelessness rates are similar for the Lower Mainland, more than 4,000 young people experienced homelessness last year.