There is no government process for ensuring LNG plants are safely located or the ships serving them won’t meet with disaster, says a new report.

But a 92-page study published by Vancouver-based Voters Taking Action on Climate Change finds no federal or provincial agency is now tasked with asking two basic questions: Is this a secure place to build an LNG terminal? And, is this water passage safe for LNG traffic?

Current government approval rules do not require weighing the risk of a deliberate attack on LNG tankers or facilities, nor do they require careful assessment how such an attack might harm the public, said the report.

“The process we have in British Columbia is a sham,” said Kevin Washbrook, author of the report and a director of Voters Taking Action on Climate Change. “There is paper and bureaucracy but there is no confirmed assessment of the risks.”

In Canada a LNG developer can pick a spot for a multi-billion-dollar LNG terminal based largely on economic reasons with little oversight on issues of public safety.

In contrast, the U.S. government has numerous laws on where LNG terminals can be put because officials have concluded that attacks either from suicide bombers, armed assailants or drones or missiles pose a genuine threat to the LNG industry and public safety.

Terrorists and other threats

“Highly combustible commodities such as liquefied gases have the potential to catch fire or, in a more unlikely scenario, explode, posing a threat to public safety,” concluded one 2008 U.S. government report.

In addition a 2009 report by the U.S. Congressional Research Service noted that “potential terrorist attacks on LNG terminals or tankers in the United States have been a key concern of policy makers because such attacks could cause catastrophic fires in ports and nearby populated areas.”

The U.S. Department of Homeland Security has included LNG tankers on a list of possible terrorist targets, reflecting global incidents.

For years, armed guards have sailed with Qatar’s LNG tankers in order to repel pirate attacks.

In 2016 a vessel loaded with explosives prematurely detonated beside a Spanish-registered LNG carrier off the coast of Yemen. The LNG carrier escaped unharmed.

LNG facilities have also been hit by repeated cyber-attacks.

In the United States, the Waterway Suitability Assessment process “requires that [LNG] proponents estimate the hazards associated with a deliberate assault (e.g. a terrorist attack) on an LNG tanker.” But no legislation like this exists in Canada, said the VTAC report.

In addition the United States has created “exclusion zones” buffering the public from potential blasts and clearing extra water space for LNG tankers to operate near land-based terminals.

A 2008 report by the U.S. Institute for the Analysis of Global Security on LNG terrorism risks recommended regulators place a large buffer zone between tankers (and terminals) “from any dense urban areas so as to minimize appeal of the target” given “its potential to provide a mass casualty incident.”

US and Canada on different pages

Washbrook said he researched the differences between U.S. and Canadian law on LNG security after being repeatedly told by LNG proponents that Canada’s industry was heavily regulated.

“I sat down and looked at the laws and that’s not what I found,” said Washbrook.

Near some of the approximately 20 LNG export terminals proposed in B.C are populated coastal communities, such as Squamish, home to a university and 20,000 residents.

The proposed Wespac LNG terminal on Tilbury Island on the Fraser River in Delta, B.C. would also expose urban populations to a continual stream of LNG tanker traffic.

“It appears the Fraser River site was selected by Wespac LNG because it is convenient to the existing Fortis LNG compression and storage facility and will provide export capacity for that facility — not because it represents an ideal, or even suitable, site for an LNG terminal,” noted the report.

None of B.C.’s proposed LNG projects have made final investment decisions or been built yet due to weak global markets, global project cost-over-runs and growing evidence that the shale gas industry has an under-reported methane leakage problem that makes the gas as dirty as coal in terms of climate impacts.

Experts note the LNG industry has an enviable public safety record, and the risk of a disaster at an LNG plant is low. But if one were to occur, say experts, the results could be catastrophic for communities nearby.

A Tyee investigation revisited a recent explosion at an LNG facility in Washington State and found that while it caused extensive damage, far worse would have occurred under a scenario that British researchers say is possible – “vapour cloud explosions” or the release of flammable gases into the atmosphere.

Other experts have pointed out that leaking liquefied natural gas would likely evaporate and burn not all at once, and that even a sudden massive release of the gas would likely dissipate quickly under common wind conditions. Still, in rare circumstances a vapour cloud could remain concentrated enough to explode into a massive fireball.

Washbrook said such complexities demand official, formal review. “We’ve had a very immature conversation about this industry so far in British Columbia,” Washbrook told The Tyee. “I think the government is rushing ahead and not paying enough attention to protecting public safety.”

The VTAC report calls for a moratorium on LNG terminals until the government has developed a rigorous regime for assessing the safety of terminal locations and connecting waterway passages before they enter lengthy and expensive approval processes. 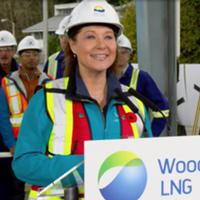 Did Christy Clark Pull a Too-Fast PR Stunt on LNG?

It recommends that federal and provincial government:

Establish mandatory and enforceable security procedures to address the risk of deliberate attack on LNG facilities and tankers;

And ensure that LNG bunkering is properly regulated and LNG bunker barges are properly certified.

“Mapping LNG tanker and terminal hazard zones must be made standard practice in Canadian LNG terminal applications,” added the report. “Coastal communities must be made fully aware of the risks that are created by the LNG industry, and they must have a voice in determining if those risks are acceptable.”