The City of Vancouver has unveiled yet another tool in its efforts to end homelessness and increase affordable housing options: modular housing.

Residents, who have yet to move in, have been selected from city-owned single room occupancy hotels, themselves a form of temporary housing, in order to open up hotel beds for people currently in shelters or on the streets.

But unlike the refurbished hotels, where tenants typically share bathrooms and kitchens, all of 220 Terminal’s 250 square-foot self-contained units include their own kitchen and three-piece bathrooms.

In addition to a land donation from the city, the project received $1.5 million from the Canadian Mortgage and Housing Corporation’s $200 million Affordable Rental Innovation Fund, as well as operational funding from Vancity Credit Union, and rental subsidies via a donation from the estate of Jimmy Chow.

The building achieves many “firsts”: the first project announced under the Innovation Fund, announced last September; first of 2,500 affordable housing units promised by the Vancouver Affordable Housing Association (VAHA) by 2021; and the first modular housing on city land in Canada.

While 220 Terminal Ave will eventually be developed, the temporary housing will remain for at least three years before being disassembled and used elsewhere. VAHA’s Harrison says there are 1,000 additional permanent units in various stages of development that tenants in the modular units will be slated to move into. That should opening up space for more people currently living in municipal SROs to move into 220 Terminal.

The modular housing was built and placed onsite by Horizon North, which typically produces industrial camp work-force housing, in a very tight six months. Built in their Kamloops’ warehouse, individual units were transported to Vancouver where they were stacked onsite to form the three-storey building.

Because of the quick turnaround enabled by factory-built housing, residents will move into 220 Terminal Ave much faster than in other, more permanent city-owned housing, Robertson said.

And thanks to an “adaptable foundation,” more units can be added to the building as needed. Or the entire building can be easily disassembled and relocated to other sites with little to no impact on the land itself.

“This is an example of where a more creative partnership is working,” said Mayor Robertson. “We haven’t been able to achieve that on some other sites that are more permanent. They require more ongoing subsidy, and we certainly expect that from the B.C. government and BC Housing, who typically participate in the permanent projects.”

Meanwhile the city is looking at more potential modular housing locations in Vancouver. While the city will continue to press the federal and provincial governments for more housing funds, Robertson added it is open to working on additional temporary modular sites with “anyone who wants to contribute and make affordable housing possible in Vancouver.

“The numbers work: it’s minimal cost to the city; it’s something that generates enough income to operate with a small subsidy,” he said. “This is an example of the kind of creative and innovative ideas that we need more of.”

Minister: this is just Phase 1 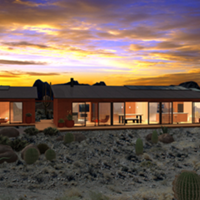 The Prefab Home Is Suddenly Fab

Duclos, federal minister of Children, Families and Social Development and minister responsible for CMHC, was also on hand, wrapping up the last leg of a B.C. trip.

The $200-million Innovation Fund, which Duclos refers to as Phase 1 of the government’s housing plans, will roll out over the next four years, and is expected to create up to 4,000 affordable rental units.

The Vancouver launch project may be different from those to follow. “In general,” said Duclos, “the type of projects that we will see over the next four years will more typically be permanent housing units.” 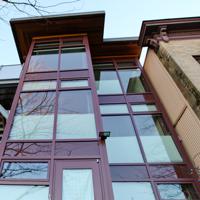 The second phase of federal housing funding will begin to flow next year, but the details of its National Housing Strategy are expected to be revealed in late spring or early summer 2017.

Duclos wouldn’t say how big a role he’s expecting either business or the non-profit non-government sector to play in Ottawa’s strategy, acknowledging that both will be important.

But while Duclos welcomes surprise funding from generous private sources like Chow’s estate, he’s not expecting it. “For those [donors] also to contribute will, I think, be more rare, but it will always be welcome,” he said.