The Supreme Court of Canada has ruled Jessica Ernst can’t sue the powerful and controversial Alberta Energy Regulator (AER) over alleged violations of her Charter rights.

The split ruling Friday — five justices rejected her claim, with four supporting it — is a setback for the protection of groundwater and the rights of landowners dealing with provincial energy regulators, often funded or captured by industry interests, say many critics and lawyers.

The majority, led by Justice Thomas Cromwell, upheld an immunity clause passed by the legislature that protects the Alberta Energy Regulator from any Charter claims or lawsuits.

In 2007, Ernst, an oil patch environmental consultant, sued the Alberta government, Encana and the regulator for negligence over the contamination of local aquifers near her Rosebud home allegedly caused by the hydraulic fracturing of shallow gas wells in 2004.

After Alberta courts ruled that Ernst could sue the government but not the regulator because of an immunity clause (Encana never contested the lawsuit), Ernst took that part of her case to the Supreme Court of Canada.

Her lawyers, along with the BC Civil Liberties Association and David Asper Centre for Constitutional Rights, argued in January 2016 that no regulatory body had the right to block citizens from seeking remedies for violations of their fundamental Charter rights and that no citizen should be unfairly silenced by Canada’s energy boards.

Alberta’s Energy Regulator accused Ernst of “criminal threats” in a 2005 letter and refused to communicate when she persistently asked embarrassing questions about the effectiveness of its enforcement actions on noise pollution and water contamination related to the fracking of shallow coal seams near her home.

According to Ernst’s original statement of claim, an AER lawyer admitted during a taped interview with her in 2007 that the board never considered Ernst a criminal threat but felt “humiliated” by her public criticisms of its abusive conduct. That exchange was witnessed by Liberal MLA David Swann.

The five justices in the Supreme Court majority concluded that immunity clauses are in the interests of “good governance.”

“Opening the Board to damages claims could deplete the Board’s resources, distract it from its statutory duties, potentially have a chilling effect on its decision making, compromise its impartiality, and open up new and undesirable modes of collateral attack on its decisions,” they wrote.

But four dissenting judges, including Chief Justice Beverly McLachlin, took the opposite view.

“We see no compelling policy rationale to immunize state actors in all cases, including where, as here, the impugned conduct is said to have been ‘punitive’ in nature,” they wrote. “To be precise, what Ms. Ernst alleges is that the Board, far from exercising an adjudicative function, effectively sought to punish her by barring access to those functions so long as she continued to criticize the Board in public.”

The Supreme Court decision is the latest chapter in a costly 10-year legal fight that has focused attention on regulation of the disruptive and chaotic technology of hydraulic fracturing.

“All Canadians have lost in this decision,” Ernst told The Tyee. “Whenever any Canadian is harmed by pipelines or fracking and they present evidence of harm to a regulator and then that regulator ignores or denies that evidence, citizens can no longer sue for justice.”

“I believe that split decision will generate a lot of debates among lawyers and judges across the country,” added Ernst. “I think some good will come from this terrible decision on a level we can’t yet imagine. I will keep going until I run out of money or die or whatever comes first.”

Cory Wanless, one of Ernst’s lawyers, said the split decision makes it difficult to fathom what the Supreme Court really means. Four judges supported the immunity clause; one raised separate constitutional issues in rejecting Ernst’s case; and four argued in favour of her right to sue the AER. “The whole issue will have to be resolved another day,” Wanless said.

In a public statement on Friday, the Alberta Energy Regulator hailed the Supreme Court decision as an important one for regulators across the country. It added that, “The Court did not find there was a breach of Ms. Ernst’s Charter rights, and made no findings of negligence on the part of the AER or its predecessor the Energy Resources Conservation Board.”

But the Supreme Court decision was not related to either of those points. It instead ruled that an immunity clause protected the regulator from Charter claims, but that “judicial review is an alternative, and more effective, remedy for Charter breaches by the Board.”

In fact, no court in Alberta or Canada has yet allowed or asked to hear the full evidence on Ernst’s Charter breaches, including extensive interview transcripts that document the regulator’s behaviour.

The AER statement also noted that court’s decision recognized “that permitting the claim would hinder the AER’s ability to carry out its statutory duties effectively and in the public interest.”

Yet new legislation in 2013 removed “public interest” from AER’s mandate. It is now a corporation largely funded by industry.

Ray Anand, a senior constitutional and human rights lawyer in Toronto, said he found the decision baffling. “I didn’t anticipate that none of the nine judges would decide the constitutional issue: whether a legislature can prohibit a constitutional damages claim against an agency of the government.”

In the meantime, Ernst’s lawsuit against the Alberta government and Encana can now proceed through Alberta courts.

After a decade of legal wrangling, Ernst has spent more than $350,000 on a straightforward contamination case and not one piece of evidence has been heard in court.

Other lawyers expressed alarm with the Supreme Court decision.

“With great respect to the Court, we’re disappointed by this decision, which denies Ms. Ernst the ability to use the Charter to defend her right to free expression in this case,” said Laura Track, counsel with the BC Civil Liberties Association, an intervenor in the case.

“The Charter guarantees everyone the right to an appropriate and just remedy if their constitutional rights are violated, but a majority of the Court has now said that, in some circumstances, legislatures may shield certain government administrative decision makers from Charter scrutiny. This decision has worrisome implications for people across the country seeking to hold government-appointed decision makers accountable for egregious unconstitutional actions.”

The decision is a missed opportunity to allow Ernst to seek redress for what she alleges were serious violations of her Charter rights, echoed Lynda Collins of the University of Ottawa’s Centre for Environmental Law and Global Sustainability.

“The behaviour described in her statement of claim represents a serious incursion on her democratic rights, and a disturbing departure from the Board’s environmental protection mandate,” Collins said. “I agree with the dissent that she should have been given the opportunity to make the case for Charter damages.”

Shaun Fluker, an associate professor of law at the University of Calgary who has dealt with the AER in court, said the majority Supreme Court decision “simply piles on to the existing list of barriers constructed in the law to immunize the AER from proper legal scrutiny.”

Those existing barriers include the AER’s ability to refuse to hear landowners and other interested members of the public on energy development concerns and the expectation that landowners must fund their legal challenges before one of the nation’s most powerful regulators. “The SCC adds to the list by effectively immunizing AER actions from Charter scrutiny,” Fluker said. “This is perhaps a bit of an overstatement, but not by much.”

The dissenting justices noted that the difficult case raised novel and important issues for the entire nation.

“The issues raised by Ms. Ernst’s claim are of significant public importance. The allegations against the Board are serious. She says that the Board abused its powers to punish a citizen and to curtail her freedom of expression, thereby breaching her Charter right. Whether Ms. Ernst may advance a claim for Charter damages against the Board in the face of a statutory immunity clause which may bar such claims will have consequences which extend far beyond the facts of this case.”

The majority justices argued that Ernst should have pressed the AER for a judicial review.

But no such remedy exists, said lawyers familiar with the AER and Alberta law.

In fact a judicial review can only be triggered when the quasi-judicial energy regulator actually makes a regulatory decision, notes Fluker. But in Ernst’s case the board did not exercise any adjudicating function or hold a public hearing.

“There is no policy decision to review here,” said Fluker. Getting a judicial review, he added, would be “next to impossible in Alberta” and would also require the permission of the Court of Appeal. 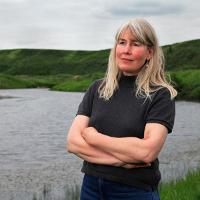 A 2014 Harvard Law School report on fracking in the U.S. set out a key issue raised by Ernst’s case.

As complaints of water contamination in areas being fracked by industry were rising, regulatory statutes and procedures were “often insufficient to respond adequately to landowner concerns,” the report found.

In addition, hydraulic fracturing has caused thousands of earthquakes in the Western Canadian sedimentary basin, with little or no monitoring of the impact on groundwater and gas migration.

Alberta, home to more than 400,000 oil and gas well sites, still does not have a formal protocol for investigating groundwater contamination as a result of petroleum drilling and fracking.

The AER, which many landowners regard as arbitrary and biased toward unfettered development, is chaired by Gerard Protti, a former energy lobbyist and Encana vice-president.

*Story corrected Jan. 15 at 10 a.m. to reflect the correct name of the BC Civil Liberties Association.