One of North America's leading experts on groundwater contamination has called the shale gas industry "a mess" and warned that no Canadian jurisdiction has set up proper monitoring to protect groundwater in areas of intense oil and gas activity. 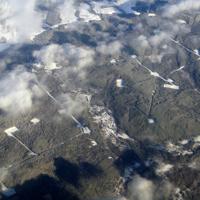 John Cherry, a contaminant hydrologist who recently chaired an expert federal panel on the impact of fracking in Canada, also lamented the lack of science on the technology.

The 72-year-old professor emeritus at Waterloo University, who has studied industrial contamination of groundwater for decades and developed effective monitoring tools, also issued a blunt warning: if government fails to fund adequate science on the mining technique or address legitimate public fears, then the shale gas industry could follow nuclear power and lose its social license to operate.

"Both (forms of energy) are in trouble for similar reasons," Cherry said, including waste disposal liabilities, technical overconfidence and the public's loss of faith in regulatory agencies.

Cherry, who currently serves as the director of the University Consortium for Field-Focused Groundwater Contamination Research at Guelph University, also criticized both industry and government public relations campaigns on shale gas development at a high-profile Toronto conference on hydraulic fracturing last week, saying they have eroded public confidence in the industry.

Many research gaps to be filled

During a wide-ranging talk to industry investors at the Munk Centre's Program on Water Issues, the groundwater expert outlined a number of research gaps for the industry that now underpins British Columbia's multi-billion-dollar liquified natural gas plans.

The hydrologist described fracking as a process of shattering shale rock at great depths with an immense amount of energy that repeatedly punctures the earth.

(Industry has also shattered shallow shale formations and coal seams both vertically and horizontally across North America and directly into aquifers both by accident and design.)

Scientists have little understanding about possible connections between shallow freshwater zones and the deep zones where mining occurs, or how methane might take advantage of pathways between them, he said.

In other words, the scientific community knows little about how the repeated puncturing of the middle zone might allow methane to creep to surface or into groundwater.

During his Toronto talk, John Cherry noted the conclusion of a recent federal panel report that found fracking's growth was outpacing scientific research on the industry in Canada had been significantly changed.

The final sentence read: "Whether or not shale gas development will turn out in the long term to have been a positive or negative influence on global well being will depend on how society understands this technology and how government manages it."

The Council of Canadian Academies, the federally-funded body that assembled a panel on the issue and published the report for Environment Canada, edited the final sentence. It took out the part emphasizing the critical importance of government management.

"That sentence was dear to my heart. There was no apology and no correction published on the website," said Cherry, who chaired the expert panel involved with the report.

He said the writing of the report, which calls for more rigorous science and a go-slow approach to fracking, was often a problematic exercise that will be the subject of a formal complaint that he is drafting to the CCA.

A spokesperson for the CCA said the last sentence was "tweaked" by staff in the interests of consistency. -- Andrew Nikiforuk

Cherry rated well integrity as one of the most important shale gas issues in terms of groundwater contamination and climate change.

Wellbore leakage has polluted groundwater, released methane into the atmosphere and created flammable hazards for households and buildings across western Canada.

A 2012 German study on hydraulic fracturing also identified the long-term stability of cement jobs on wellbores as a critical and unresolved issue for the oil and gas industry.

No cases of 'rigorous' monitoring found

Studies on the impacts of leaking methane from shale deposits or intermediate zones and its effects on groundwater quality are also lacking.

One study by Duke University in the U.S. found that methane contamination of domestic water wells increased dramatically one kilometre away from dense shale gas activity.

"The natural gas goes into groundwater and is eaten by bacteria, and that changes the quality of the groundwater for better or worse," said Cherry. "There isn't a single scientific paper on this topic related to shale gas development."

The EPA recorded its first fracking contamination case in West Virginia in 1987, and the U.S. Geological Survey has reported a variety of methane contamination cases beginning with the fracking of coal seams in New Mexico in the 1990s.

The Alberta Energy Regulator has also reported the contamination of a shallow aquifer by fracking fluids in Grand Prairie in 2012.

Industry, government and media "mantras" of fracking as problem-free industry stem from a near total absence of good science and proper groundwater monitoring across North America, Cherry said.

"I found no cases where rigorous groundwater monitoring has been done at any fracking pad. Exactly zero, not a single one. Anywhere, ever," Cherry said during his recent Toronto talk.

Cherry called such comments by a politician irresponsible. "As an expert, I know that British Columbia has invested very little money in the type of research and monitoring that it would need to make statements about shale gas being safe."

An effective groundwater monitoring system, as first set out by Vancouver engineer Frank Patton in 1998, places measuring devices into specifically-designed wells that sample and track the movement of water contaminants over time and at various depths from a variety of locations. Not even the oilsands has set up such a basic system, said Cherry.

Given that industry spends millions of dollars on the fracking of unconventional deposits and often billions in certain regions, it is imperative that government funds basic research to protect groundwater and the atmosphere, he said.

Asked why government was reluctant to monitor a public resource as valuable as groundwater, the hydrologist replied that it costs money to monitor past societal mistakes. "Groundwater pollution develops slowly over years and decades. If there is anything that government can shrug off to the future, it's groundwater."