Like many First Nations in Canada, the Yale First Nation has struggled to provide its members housing that withstands southwestern B.C.’s nine months of rain without breaking the bank.

Yale receives a maximum of $169,000 from the federal government to build a house. That’s enough for a single-family, wood-frame house or, as Yale First Nation Chief Ken Hansen calls them, “B.C. box houses.”

The houses meet the basic B.C. building code. But that’s not saying much. Such “stick-built” on-site houses can take six months to a year to put up, so long as the Yale area’s frequent rain delays co-operate. And even when complete, the to-basic-code structures are drafty. Lingering moisture leads to mould and rot.

Nonetheless, Yale has built 14 “B.C. box houses” of three or four bedrooms each for rent to members in three different reserve communities. Those tenants pay for the structures’ poor quality on an ongoing basis, said Crystal Sedore, housing manager for the Yale First Nation: “In the winter, we have a couple of houses that are over $200 a month to heat.”

For many tenants, that’s a lot of extra money to come up with. Often it falls to the band to bail them out by paying the bill. “It’s just one more thing that the band should not really be doing, but we have an obligation to make sure that our membership has heat and hydro,” Sedore said. “So we do it.”

So when the band decided to invest in building some new rental housing, they knew what didn’t work. What were needed were homes that would cut down on energy costs, withstand the wet climate, and be suited to singles and smaller families.

That led Yale to Langley, B.C., in the Vancouver suburbs, and to Britco, a modular building company. Yale contracted Britco to build 10 two-bedroom units in a pair of buildings that meet the high-efficiency Passive House design requirements.

A six-plex in Ruby Creek reserve just south of Hope, B.C. is expected to welcome its first tenants at the end of this month. Construction on a smaller four-plex is slated to begin this spring in either the Stullawheets or Dogwood reserve north of Hope.

“For us, the appeal was not only are we being environmentally conscious, which is very important to our chief and council,” Sedore said, “but also to build housing that is beyond minimal acceptable standards.

“We want something better, and our membership deserves better.”

Turn on the lights to stay warm

Passive House is a home designed to be so energy-efficient that it can stay warm at 17 C with residents’ body heat, energy from the sun, and turning on the lights.

That means thicker insulation than standard building codes require, triple-glazed insulated windows that face the sun to take advantage of nature’s heating system, and a heat-recovery ventilation system to ensure fresh air cycles through the house while maintaining internal temperatures.

Britco boasts that their previous Passive House project, in Bella Bella, B.C., takes as much energy to heat on the coldest day of the year as turning on six 100-watt incandescent light bulbs.

“We’re looking at hydro bills estimated to be $10 to $20 a month for heating and electricity” in these new units, Sedore said. Yale will track the two complex’s energy use and share the data, providing a valuable test case for modular Passive House designs in other communities, regardless of whether or not they’re Indigenous.

Best known for its bright orange trailers used as offices or first aid centres on construction sites, Britco expanded into affordable housing seven years ago. After the 2010 Winter Olympics, it re-assembled modular units it had originally supplied for the Games’ staff accommodation into a total of 156 affordable housing units in six buildings in Chilliwack, Surrey, Enderby, Chetwynd, Saanich and Sechelt.

The company’s first Passive House development was the one in Bella Bella: six townhomes built for Vancouver Coastal Health staff. From conception to finish, the whole project took seven months in 2015 — highlighting one way that modular housing differs from conventional on-site “stick built” construction. Building the same structure the old-fashioned way, subject to the weather, might easily have taken up to a year.

Modular housing is built off-site under more controlled conditions. Britco does the majority of its construction inside an Agassiz warehouse where it takes 30 days to complete one unit of Passive Housing, with multiple units under construction at the same time.

“It’s probably a half to a third the time of stick-built [construction],” Sedore said. In fact, Yale’s units could have been delivered in as little as three months, she says, if Yale First Nation had been the sole sign-off on funds. As it was, waiting for funding approvals from Canada Mortgage and Housing Corp. extended the whole process from signing the contract with Britco to moving in new tenants, to six months.

Hansen said the nation met with and considered other modular home providers in B.C. and Ontario, but it was Britco’s relationship with Indigenous communities that tipped the scale in its favour.

Company president Obie Erickson is well known in the Yale community, which sits on traditional Yale First Nation territory. “They engage First Nations and they do it in a proper manner,” Hansen said.

The company partners with First Nations on projects, employment and skills training, and has donated modular buildings to remote Indigenous communities for use as libraries.

While CMHC funding differs by location, the Yale First Nation’s maximum of $169,000 per housing unit, while enough to build family-sized homes to the province’s basic building code, doesn’t generally cover the additional costs of Passive Housing — estimated to be 10 to 15 per cent more expensive than conventional units with similar interior finishings. 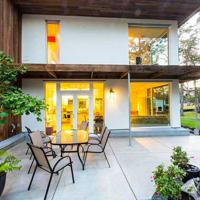 The House of the Future Is Passive

The Yale First Nation negotiated to bring costs down by replacing carpet with linoleum and not including furniture. In the end, the projects came in exactly within the federal government’s budget, Sedore said.

All 10 units in the two buildings will be two-bedrooms. The one-storey units in the four-plex will rent at $375. Rents for the market-rate townhouses in the six-plex have yet to be set, but Sedore estimates they will be between $525 to $600 a month.

Many will be occupied by single tenants currently living in family housing that’s too big for them, Sedore said. While not every tenant is pleased with that exchange, she adds, it will allow some of the 16 families currently on Yale’s rental housing wait-list to move back to their community. (Yale is also renovating existing rental units, including making them more energy efficient.)

Feedback from membership and the band’s ad hoc housing committee on the project’s design has been “amazing” so far, Sedore said. Most of the excitement has to do with the buildings’ look and feel, not their Passive House aspect, Sedore admits. But she attributes that to a lack of appreciation so far for the difference between energy-efficient and conventional design.

“I think once we get tenants in and they start to see those real savings,” she said, “they’ll be really happy to see this brought onto reserve.”

And if modular Passive homes can deliver on their promise of cheaper, faster, healthier housing in Yale, other communities in Canada might be happy to see some of those savings, too.