If you care about carbon emissions, forget about energy-efficient light bulbs or taking the train -- think building envelopes. 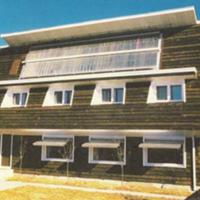 Step Inside the Real Home of the Future: Passivhaus

This arcane term refers simply to how well insulated a structure is from the outside world.

Buildings last a long time and heating and cooling them consumes an enormous amount of energy -- more than all forms of transportation combined. In terms of bang-for-buck, there are few things that reduce needless energy use more than making sure we construct buildings that are not full of holes.

The average Canadian home has collective air leaks equivalent to an oven-door sized hole in the wall. Calculate that energy wastage over the lifetime of a building and you are talking about serious financial as well as climatic consequences. We can and should do better. Investing ten per cent more in building costs can result in a ninety per cent reduction in energy use.

This week, experts from all around the world are gathering in Vancouver for the first North American conference on Passive House technology: a building practice pioneered in Europe where 40,000 of these super-insulated and airtight buildings have already been constructed.

A home built to Passive House standards would typically need no more than a hair dryer's worth of energy to heat in the winter.

Triple-paned windows, extra insulation in walls and ceilings and airtight door frames minimize needless heat loss. Coupled with an almost obsessive attention to detail to guarantee every nail and plumbing hole is plugged, these techniques ensure that the oven-door sized hole in the wall is more like a postage stamp.

"Passive House is actually a more affordable way to construct any building in Canada, once operating costs are considered," says Monte Paulsen, former investigative editor of The Tyee who is now Vancouver-based energy modeler and spokesperson for the Canadian Passive House Institute.

"Thick insulation and triple-paned windows add only a few hundred dollars a year to a typical mortgage, while saving about a thousand dollars a year off the average gas and electric bill. And that's at today's energy prices. This baked-in affordability is why organizations such as Habitat for Humanity are starting to build to the Passive House standard."

Early adopters of such ultra-tight buildings learned the hard way that ensuring proper ventilation without heat loss was key to preventing moisture build up and mould. This problem has long-since been solved with the use of heat exchangers that constantly draw in fresh air while maintaining the temperature inside the building. Typically the air inside such structures is replaced about every three hours.

While cities like Brussels are mandating that all new buildings must be built to Passive House standards by 2015, North America is just starting to embrace these innovations. The first such structure in Canada was not built until 2009 for the Whistler Olympics. (Although the Saskatchewan Conservation House, built in 1977, served as inspiration for what would become the Passive House standard.)

Specialty materials and expertise both had to be imported from Europe. Fewer than 100 of these structures have so far been certified in the United States but there are a number of promising new examples in North America including a triplex recently constructed in Nelson, B.C.

Canada's slower adoption rate might be traced to the higher cost of energy in Europe. Electricity rates in Germany are more than three times that of British Columbia -- amongst the lowest on the planet. Still, a 90 per cent reduction in energy use would result in annual savings of about $1,000 per year for an average Canadian home.

"A high-performance building envelope is a long-lasting investment. Properly installed windows and super-insulation will last 100 years or more, while even the best boilers or heat pumps will wear out in 20 years," Paulsen says.

B.C. is also cultivating some homegrown talent in Passive House technology and building materials. Passive Houses can be constructed out of any material but the industry is coalescing around pre-fab solid wood walls and floors such as cross-laminated timber (CLT). This is a departure from conventional two-by-four construction techniques predominant in B.C., but CLT is now being manufactured by at least two local companies.

Innovative materials such as these can help diversify the B.C. forestry economy and ensure we are not dependent on importing such specialty wood products from places like Germany. Solid wood walls such as CLT have also proven to be highly resistant to earthquakes, making this building practice a good fit for such a seismically active area.

An online video shows a seven-story CLT building surviving ten simulated earthquakes up to 7.0 in magnitude. It was later reassembled in Italy where it is still being used as a student residence.

The Passive House conference is primarily geared towards builders and engineers but there are several events that are more of interest to the general public.

Almost 200,000 homes are constructed every year in Canada and most of those buildings will last for decades. It is vitally important we improve energy efficiency and one of the best places to start is to ensure those houses don't have an oven-sized hole in the wall.