For the first time ever, Vancouver has opened four “warming centres” on top of existing extreme-weather response shelters across the city. But as unseasonable cold persists, advocates are already challenging the city to keep community centres accessible to homeless people year-round.

Vancouver operates several types of shelter beds for homeless people. There are 956 available year-round, 195 more open during the winter only, and another 234 that are opened when the province declares an extreme weather emergency.

In a statement Saturday, B.C.’s minister responsible for housing, Rich Coleman, said the government was “spending $1.6 million” to fund extreme weather shelter beds across the province, and is extending funding to keep three shelters in Vancouver “open every night until the end of January.”

“Emergency shelter operators assure us that no one has been or will be turned away if they need a warm place to sleep,” Coleman insisted.

Despite those moves, and although December was only the 16th snowiest on record for the Lower Mainland, advocates say that the consistently cold temperatures still drew more people to shelters than they had room for. That has pushed some to call on the City of Vancouver to make more space for those turned away.

In partial response, the city last month opened up “warming centres” in four community centres to supplement the emergency beds provided when the province issues an extreme weather alert. The centres offer only a heated indoor space — no beds or other services.

Still, between Dec. 20 and Jan. 3, the city’s four warming centres saw 1,771 visits — 1,346 over 10 nights at the Britannia Community Centre-run space on Commercial Drive alone. In that 16-day period, some centres were open for 10 nights or fewer.

Forecasts project cold weather to last through all of January, at least. But keeping the warming centres active depends on demand and staff availability when the province calls an emergency weather alert, according to city spokesperson Tobin Postma. (The City of Vancouver did not provide the costs of running the warming centres by press deadline.)

That has housing advocates calling on the city to keep the warming centres open not only every night, but year-round as well.

DJ Larkin, with Pivot Legal Society, is one of the voices calling on the city to open up community centres to meet the overflow of homeless people being turned away from emergency shelters.

“Certainly it’s important” to have warming centres, Larkin said. Without them “people are doing their best on the streets, and it’s ideal to get people inside where it’s safer and warmer.”

“I just think we need to find a more consistent and predictable way to run them,” Larkin said. “It is a worse use of resources to have bylaw officers, parks staff, city employees, going and finding people in the morning either to move them along because they’re camped outside a community centre, or to find they’re not doing well because they’re out in the cold.”

Larkin also finds it “concerning” that the city is only running warming centres when an emergency weather protocol is in effect. As soon as temperatures rise above what’s officially considered dangerous, the safe places to get warm and dry are closed, she said.

“And in Vancouver that’s so dangerous because it means that it’s slushy outside, you’re going to be soaking wet. You’re freezing. It’s not adequate.”

“And we need to start thinking about summer as well,” Larkin said, as shelters overflow all year, and weather presents dangerous risks for those who are seeking shelter outside during that season as well.

Meanwhile, Vancouver continues to tie the opening of warming centres to extreme weather alerts as city staff watch “how that all works” out, said Ethel Whitty, the Carnegie Community Centre director who also manages the city’s homeless services.

“We’re trying to figure out what the [warming centre] usage is and what the need is,” she said. “I think we’re going to learn a lot, in terms of who needs support, who is willing to accept it. Because of course if we look at our stats we do see it on the really cold nights.”

Each warming centre is staffed by a combination of a few city parks and recreation staffers and volunteers. Anyone looking to stay warm is welcome to use the space.

Whitty said there is an outreach process to let people know when a warming centre is open, also tied to the extreme weather response alert. Although people are not provided a cot or mat to sleep on, they’re welcome to bring blankets and find a corner to sleep.

Others come in only wanting a place to sit and stay warm, Whitty said, or “maybe get a cocoa or something and then go back out.” 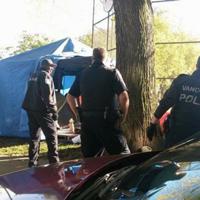 While it’s still “early days” to judge whether warming centres are needed year-round, Whitty said, the impetus to create them didn’t come from advocates, but from various assistance groups’ “heightened awareness and heightened anxiety.”

“Everybody was on the same page, it’s a problem we need to help right now,” she said.

The idea of opening community centres in emergencies to those without homes isn’t unique to Vancouver. South of the border, where Seattle has declared that homelessness has created a state of emergency, poverty-relief advocates have called on the city to do the same — whether during a cold snap or a heat wave.

Ann LoGerfo, directing attorney with the non-profit Columbia Legal Services, said her agency told the city more than a year ago, when Seattle first declared the homelessness emergency, that it should treat the situation like “a true emergency.”

“Why aren’t community centres opened?” LoGerfo asked. “If there was an earthquake, all sorts of things would have been made available to the people who were the victim of the emergency. So why aren’t those things being made available if it’s a homeless state of emergency?”

As Larkin puts it, Vancouver’s new warming centres are a good start, “but there’s a long way to go.”