Anxiety takes a toll on people: they worry, they feel irritable, they avoid social gatherings — like an upcoming New Year’s Eve party. Juvenile salmon also experience stress when faced with unfamiliar situations, such as migrating out to sea where they’ll encounter predators. While anti-anxiety medication helps countless humans function better in their daily lives, new research shows the drugs also make salmon less inhibited, which can have potentially devastating effects.

In a study out of Sweden’s Umeå University, researchers show oxazepam — a pharmaceutical prescribed to humans for the treatment of anxiety, alcohol withdrawal, and insomnia — affects the downstream migratory behaviour of Atlantic salmon.

Exposing fish to anti-anxiety medication isn’t something that only happens in scientific studies: when humans excrete drugs, some can end up in wastewater effluent and subsequently in sensitive habitats where salmon may get an unintended dose. The researchers found that when fish ingest oxazepam, it makes them migrate faster and farther — potentially recklessly so.

Leaving the freshwater nursery and heading out to sea is part of the salmon lifecycle, but landing in the big blue too soon can be risky. Fish may find ocean conditions unfavourable — too cold, too dangerous, or lacking food, for example.

Gustav Hellström, a salmon biologist at Umeå University and lead author on the study, says stress is probably an adaptive response as it may minimize unnecessary risk-taking and help maintain alertness.

“If we interfere with the swimming behaviour that’s been adapted to that river, it’s probably bad for the salmon. It would expose them to more risks,” Hellström says. “The migration behaviour in itself is probably matched evolutionarily to different kinds of environmental factors.”

Calling all lovers of coastal science, environmental news, or just stories well told. Hakai Magazine, a Victoria-based publication that features rich and compelling tales of coastal life and phenomena, just had a banner year. Its long-form story “The Whale Dying on the Mountain,” which chronicled the disappearance of the Comox Glacier, won the 2016 Jack Webster Award for “Best Feature Story-Print.” Check out the site’s 16 best stories of 2016 here.

Hellström and his colleagues studied how salmon respond to oxazepam in a large artificial stream and in a natural stream in Northern Sweden. In both environments, they found that fish treated with oxazepam migrated nearly twice as fast as sober salmon. Hellström points out that the salmon in his study were given a low dose of the drug within the range of concentrations that have been found in effluent water.

“The paper gives pretty strong evidence that anxiety and stress are a force that counterbalances foraging and migration,” says Will Atlas, a PhD candidate with the Hakai Institute who wasn’t involved in the research. “I think we’ve kind of known that for a long time in how we understand behavioural ecology, but this is a very tangible demonstration of it.”

Atlas, who studies the biology of Pacific salmon and their ecosystems, says Pacific salmon would likely react to oxazepam the same way Atlantic salmon do. “There may be species-specific reactions, but I think the direction of the response would probably be the same,” he says. 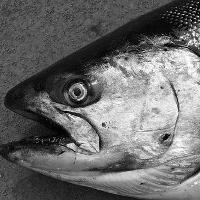 According to the World Health Organization, the use of anti-anxiety drugs is projected to increase globally. As a result, the concentrations of oxazepam in aquatic environments near urban areas could more than double in the coming decades, according to a 2015 study.

“Our research group does not want to try to limit the prescriptions of drugs,” Hellström stresses. “It’s really important to state that these drugs do a lot of good for people and reduce suffering.” It’s wastewater treatment that needs to be improved, he says.

The study does suggest one potentially promising application of the researchers’ findings. Enhancing weak wild salmon populations with hatchery smolts is a fisheries management practice worldwide. However, the success of so-called enhancement stocking is generally low, in large part because of inadequate migration. The researchers suggest further exploring whether treating hatchery salmon with oxazepam, which the fish eventually eliminate from their bodies, could be beneficial.

The study also suggests a new way of understanding salmon migration. “It allows us to talk about cognitive and emotional dimensions in fish and that’s really controversial,” Hellström says. “Migration is almost always discussed in terms of environmental factors. This highlights that there is more to it than that.”