The premiers are in Ottawa for meetings with each other, Indigenous leaders and federal politicians including discussions about the federal government’s plan for a national carbon tax.

At something much like an open mic for premiers at the Chateau Laurier near Parliament Hill, media spent the morning asking six of the provincial leaders what they thought of the federal government’s plan to impose a minimum carbon tax on provinces.

Some supported the idea of some form of federal carbon tax, while others were against it.

But one thing was certain — each claimed to be leading the charge against climate change.

Saskatchewan Premier Brad Wall started out by declaring he has no intention of signing a climate agreement and said he’d consider taking the federal government to court if one was imposed.

Wall argues a federal tax would hurt provinces that depend on the energy industry to drive their economies and said the idea hasn’t received enough study.

Plus, he pointed out, Russian President Vladimir Putin isn’t likely to introduce a carbon tax, so why should Canada makes itself less competitive by doing so?

Wall said his province is doing its share by investing in innovation to reduce carbon emissions, and argued that’s the best approach.

“We made the largest per capita public sector investment in CO2 mitigation in this country in the province of Saskatchewan,” Wall said, referring to the Boundary Dam carbon capture project. “This has been our focus and will continue to be our focus.”

Wall said SaskPower, the province’s public electrical company, is moving to 50 per cent renewable energy by the year 2030. “The point is this we are not just sort of taking pot shots from the sidelines, we’re engaged, we are doing things,” he said.

British Columbia Premier Christy Clark said that although her province already has a carbon tax, she takes issue with the federal government’s plan because energy-producing provinces will pay a larger share of the costs.

But it was nice to see the feds trying to get the rest of the country to follow Victoria’s lead, she said.

“More than any premier in the country, I have been saying for a long time we need a national carbon price,” Clark said, “cause we’ve been at $30 for eight years and it’s been great being a leader in the country, but it’d be nice having the rest of the provinces catch up to us.”

Clark argued the revenue from any such tax should stay in the province where it is collected. Governments should return the tax revenue to citizens rather than simply spending it, she added.

Rookie Manitoba Premier Brian Pallister said his government is working on a plan that will both balance the climate’s needs and the economy.

“Upon our election this past spring we embarked on a strategy to develop our own made-in-Manitoba climate plan and we have been working very intently on that project,” Pallister said.

It’s not ready yet though, he said, explaining his government will try to complete the plan in 2017.

Prince Edward Island Premier Wade MacLauchlan said his province has invested $200 million in wind power since 2000 and generates 25 per cent of its electricity from it.

MacLauchlan said education is key in getting people to cut back on their energy consumption. 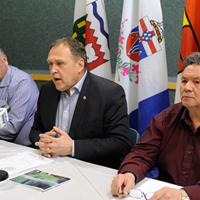 Wynne disagreed with Clark’s concern that western provinces could end up being hit harder by a federal tax. The closure of her province’s coal-fired power plants to reduce emissions and fight climate change have hit Ontarians hard in the pocket book, she said.

“We will continue to, quite frankly, lead in North America in reduction of GHGs,” Wynne said.

She said the province’s cap and trade system has produced amazing results and the rest of Canada needs to follow.

“In our projections we’ll overachieve in the country,” Wynne said. “That is what the conversation has to be about and then B.C. and Saskatchewan and all the provinces will need to decide how they’re going to reduce their greenhouse gas emissions then choose the path forward.”

Wynne noted that the premiers did not discuss climate change during the morning meeting.