The Trump campaign’s symphony of bigotry has vibrated through the Conservative Party leadership race as two of the candidates choose markedly different paths to victory.

While Simcoe-Grey MP Kellie Leitch applauded Trump’s victory and pushes screening new immigrants for “anti-Canadian values,” former immigration minister Chris Alexander is marking his turf as a candidate who would let immigrants in and keep Trump’s style of politics out.

Alexander lost his seat of Ajax-Pickering in last year’s election, but said he remains committed to politics.

Speaking to The Tyee during an hour-long interview in Montreal’s Pierre Elliott Trudeau airport before grabbing a flight to Winnipeg for a campaign stop, Alexander explained not only why Leitch’s plan is flawed, but could ultimately hurt Canada.

“You only get great results from immigration and integration when there is trust,” Alexander said. “We have relatively high levels of trust and that is one of the most precious assets we have.”

Canada is built on a unifying narrative about immigrants’ importance, he said, and the shared reality that it is a nation of people who arrived from other countries — aside from Indigenous peoples.

A divisive campaign framing immigrants as potential threats could damage that trust and the benefits it creates for the economy and society, he said.

Leitch, a medical doctor and professor, congratulated Trump on his win, calling it an “exciting message” and suggesting Canada needs to oust “elites” from the halls of power. The move sparked rebukes from former students and even her former press secretary.

Leitch has said she doesn’t endorse Trump. But her proposal to screen potential immigrants for “values” and her vitriol against “elites” has resulted in criticism she’s attempting to follow Trump’s path to victory.

Leitch, like Trump, has also lost support from the party establishment. And last week she left a leadership debate at the last minute, saying she needed to deal with “threats” and a possible break-in at her Creemore home.

Alexander said Leitch’s tactic of claiming the immigration system is weak and a threat to Canada is “unfair.”

And her plan, which would include a face-to-face interview for all immigrants, refugees and even visitors, would cost a fortune, he said. Immigrants alone account for up to 300,000 people a year, he said, and having enough staff overseas to interview each one would be hugely expensive.

And the money would be wasted, Alexander said, because people who really are a danger to Canadian society are not going to be honest.

He said the current measures — background checks, a review for possible terrorist connections and merit-based admission — work well and are admired by much of the world.

“We do that better than we’ve ever done it and you can see the result,” Alexander said. “I don’t think you can point to a lot of high-profile crimes, and certainly not terrorist attacks in Canada, recently that go back to immigrants.”

But last year, in the federal election campaign’s homestretch, Leitch and Alexander stood side by side to announce the Conservatives’ plan for a “barbaric cultural practices” hotline.

The plan to create a tipline for people to call if they suspected neighbours of activities like forced marriage brought accusations of racism and opponents attacked the Conservatives mercilessly on the issue.

Leitch, then minister for the status of women, said she regrets taking part in the announcement.

Alexander said Saturday that he wishes the Conservatives had run a different campaign.

And he said that even though he was immigration minister, he only found out about the hotline plan an hour before he announced it at a press conference.

Alexander still insists the intent of the plan was to deal with acts like forced marriages.

Alexander also acknowledged what he now calls a “meltdown” on a CBC news show when he tried to blame the media for the Harper government’s limp response from the government about the refugee crisis.

The government’s response to the Syrian refugee crisis became a major issue in September after photos of the drowned body of three-year-old Alan Kurdi on a Turkish beach sparked a global outcry for Western nations to accept more refugees.

Alexander said he cared deeply about the plight of refugees and had suggested the Conservatives announce plans to increase the number of refugees admitted to Canada within 48 hours of the Kurdi story breaking. Then Conservative leader Stephen Harper had announced an increase in refugee admissions from 10,000 to 20,000 in August. Alexander says his suggestion of a further increase was not accepted.

Instead, the Conservatives committed to speeding up refugee applications and an increase after the election.

Alexander took most of the flak for the government’s refugee decisions. A year later, up against the public’s memory of the election, he said wants to build his campaign based on the trust he says is so important to Canada’s functioning, not just on immigration but on other policies.

Leitch said she isn’t a racist and is delighted so many people were supporting her candidacy.

“There have been some people that have obviously become upset because of these ideas I’m putting forward, but I’m going to continue to talk about them,” she told AM 640, saying polls show a majority of Canadians agree with her.

Later in the week Leitch condemned the appearance of anti-Chinese posters in the Vancouver suburb of Richmond as racist and against Canadian values.

Values are individual and the most important one is respect for the law, he said.

Leitch will not likely be persuaded to change her views, Alexander said, dismissing the suggestion she was merely taking her positions to generate media coverage.

“She’s a person of integrity and I don’t think she’s going to come out and say things she doesn’t believe in,” he said, noting he considers Leitch a friend. 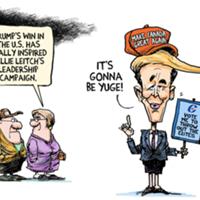 Why Is Elite Kellie Leitch Railing against Elites?

But he said Leitch is likely being “brought” to believe they are sound policies by her campaign team. The team is centered around Nick Kouvalis, who ran the campaigns for both Rob Ford and John Tory when they were elected mayor of Toronto.

Leitch is a frontrunner in the crowded leadership race, polling as high as 20 per cent support.

Alexander said the best way to respond to her policies is by not engaging and remaining adamant Canada is “in a different place” — though he worries a weak economy could lead to a populist Trump-style movement.

“Let’s have policies and let’s have debate that actually are inclusive and focus on issues that actually matter,” he said, pointing out Leitch’s views on immigration are opposed by most of the 12 Conservative leadership candidates.

“We’re going in other directions and I think that’s the mainstream conservative and mainstream Canadian approach to immigration.”