The May 19 exclusive event wasn’t revealed on Trudeau’s daily itinerary, which said Trudeau was spending the day in “private meetings.”

But Dawa News, a Chinese-language business news website, reported the dinner party took place at the home of Toronto businessman Benson Wong, chair of the Chinese Business Chamber of Canada.

Trudeau held two events in Toronto that day, both asking for $1,525 donations from people who wanted to spend time with the prime minister.

Photos of the fundraiser have been posted on Dawa and other news sites and the website of a financial firm. They show a relaxed Trudeau drinking beer and helping to make dumplings for about 35 attendees. He gave a speech on China-Canada relations, Chinese-language media reported.

Liberal communications director Braeden Caley confirmed Trudeau was at a fundraiser at a private home in Toronto that evening.

“As one would expect, Liberal Leader Justin Trudeau meets with thousands of people each month, at a wide variety of events and meetings all across Canada,” Caley said in an email. “Mr. Trudeau attended a fundraising event on May 19 of this year in the private residence of a volunteer.”

The Dawa News article lists representatives of Chinese-Canadian business groups at the fundraiser.

They include Shenglin Xian, the founder of Wealth One Bank of Canada, a bank aimed at Chinese Canadians. Xian posted photos of himself and Trudeau at the dinner on his company’s web page.

Another dinner guest was Liu Meng, chairman of the Yangtze River International Chamber of Commerce, which is opening a branch in Canada. 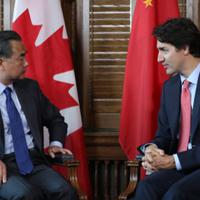 ‘Stand Up to China on Rights,’ Jan Wong Tells Trudeau

His photo appears with Trudeau in the publication Yangtze River Network, a Chinese-government-run media outlet based in Wuhan, China.

Liu has travelled the world on behalf of the association forging business ties, including with former Italian president Silvio Berlusconi.

Caley said Liu, as a Chinese resident, was at the dinner as a guest of the host and did not make a political contribution or pay to attend.

The Liberals have been slammed for “cash for access” fundraisers that critics say offer those with money the chance to lobby the prime minister and cabinet members.

Trudeau is reported to have held a similar fundraiser at a private home in Vancouver on Nov. 7.

Caley said Trudeau and other Liberal MPs have been at hundreds of outreach events across Canada for different causes.