The British Columbia Liberal Party should be more worried than they appear to be about the public’s distaste for pay-for-play politics, says Integrity BC executive director Dermod Travis.

“I don’t think they feel as threatened as they should be by the issue,” Travis said.

He said he’s noticed media stories about cash-for-access get heavily shared on the Internet, as do his postings on the topic. “People really care about this stuff,” he said. “This is an issue that people want to know about. They want to hear. They want to get their heads around it.”

The Tyee reported this week that Apotex, the generic drug company that’s been at the centre of recent federal cash-for-access fundraising stories, was the lead sponsor of the BC Liberal Party’s convention in Vancouver last weekend.

A company spokesperson asked for questions to be sent by email, but failed to respond by publication time.

Asked what Apotex might want from British Columbia, Travis said, “To make certain their drugs are treated, looked at, with favour by B.C.’s Pharmacare program. It’s not rocket science.” 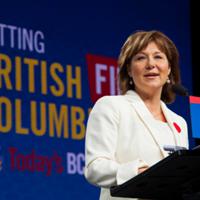 Premier Christy Clark, who has been under fire this year for attending exclusive, high-priced Liberal fundraisers and accepting a $50,000 stipend from her party on top of the money she’s paid by the public, told The Tyee she believes it’s appropriate for private donors to fund the activities of political parties.

“We don’t believe that political parties should have to take money from tax dollars in order to be able to run elections,” she said.

Travis said B.C. taxpayers already give political parties a $16-million subsidy, with the BC Liberals the biggest recipient, through generous tax credits for political donations.

The federal government has banned corporate and union donations and has capped individual donations at $1,500, and yet the parties manage to run their campaigns and business between elections, he said.

The pressure hasn’t been as relentless in B.C., he said. “In my tracking of the B.C. media, everyone’s singing from the same song sheet, but not day after day after day.”