Oil and gas workers struggling in the wake of collapsed oil prices want to try their hand at clean energy jobs and have asked the federal government to help make that transition a reality.

The plan demonstrates strong support for the clean energy sector from within the industry workforce — a narrative that conflicts with industry support groups like Canada Action that vocally advocate for continued fossil fuel development.

“This isn’t about taking jobs away from people, this is about opening up sustainable opportunities for skilled workers so their families can thrive,” Lliam Hildebrand, a boilermaker in the oilsands and executive director of Iron and Earth, said in a statement.

“We’re giving a voice to real oil and gas workers who deserve a say in these issues and who want a better future.”

The Workers’ Climate Plan is an attempt to find “common ground” and “preparing our country for the future,” Hildebrand writes in the report’s executive summary.

“Addressing climate change while developing our energy industry doesn’t have to divide and polarize our country. As we look ahead one thing is certain: Canada needs to come together around a national climate strategy that unites people and drives growth in a new energy economy.”

An estimated 43,000 jobs were lost in the Alberta oil and gas sector in 2015 as a result of market changes. In a survey, Iron and Earth found 63 per cent of workers support making the transition to clean energy jobs with some training upgrades. Sixteen per cent said they wouldn’t require retraining to shift into renewable energy.

Kerry Oxford, mechanical engineering technologist and member of Iron and Earth said “workers deserve something sustainable, so we don’t find ourselves in this boom-and-bust mess ever again.” 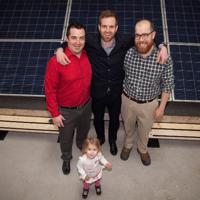 “That’s why we’re taking time out of our lives to work on this problem together,” Oxford said in a statement. “That’s why we spent four months talking with colleagues, coming up with a plan that works for the long term.”

“With large scale renewable projects ramping up in Alberta and Saskatchewan in 2018, we only have a brief window to build up our workforce and manufacturing capacity for the next employment boom,” Hildebrand writes.

A Solar Skills and Training Program and Renewable Energy Activation Program organized by Iron and Earth are in the works to facilitate the kind of skills upgrades and training needed.

“As energy-sector workers, we want Canada to lead the transition away from carbon dependency — not lag behind it.”