Northern red-legged frogs and barn owls are two at-risk species that may suffer harm if the plan proceeds to replace the George Massey Tunnel in British Columbia’s Lower Mainland with a bridge.

The $3.5-billion plan that Premier Christy Clark announced in 2013 would see a 10-lane bridge built over the south arm of the Fraser River and Deas Island to replace the tunnel. The project also includes three interchanges plus other alterations to Highway 99 between Bridgeport Road in Richmond and Highway 91 in Delta.

The 61-day period for the public to comment on the environmental assessment application for the project closed on Oct. 3.

Independent Delta South MLA Vicki Huntington made a submission, but said she feels the environmental assessment process has become a sham.

“People have lost trust in the process and any sense the public consultation is meaningful,” she said. “It’s all pretense. Nobody will say ‘no’ anymore. ‘No’ is no longer in the language when development is at stake.”

According to a study prepared for the provincial transportation ministry, researchers discovered DNA from red-legged frogs in two of the 15 bodies of water they tested in the area that will be affected by the project.

“This suggests the potential use of aquatic features in the vicinity of the project by at-risk amphibians,” said the April 2015 report recently made public.

Red-legged frogs are blue-listed by the Committee on the Status of Endangered Wildlife in Canada, meaning that the species is not yet endangered but is considered vulnerable. It is also listed on Schedule 1 of the federal Species at Risk Act.

The project application, a 4,418-page document, says red-legged frog DNA was found in a ditch about 200 metres north of the project, and if allowed, “The project has the potential to interact with and affect red-legged frog through the loss or disturbance of its breeding or living habitat, or through direct mortality associated with project construction.”

Another study found that of the 2,401 hectares in the project area, 13.3 per cent is considered to be either moderately or highly suitable habitat for barn owl foraging. Barn owls are of “special concern” under the Species at Risk Act since they are “particularly sensitive to human activities or natural events,” the report said.

A third study found 14 raptor nests in the project area, including six active bald eagle nests. “Four nests are located near the tunnel,” the report said. “Bald eagle nests are afforded protection year round under the Wildlife Act and must not be disturbed or destroyed.”

MLA Huntington said the project is politically driven and she expects the government will ignore any environmental concerns raised during the assessment process.

“Either we care about endangered species and follow the law that is intended to protect them, or we don’t,” said MLA Huntington. “We’re still Neanderthals when it comes to making decisions that respect environmental science and knowledge.”

The project will have significant impacts and the government so far has made little effort to mitigate those impacts, she said. “I’m fearful we’re seeing the rapid destruction of a way of life, an agricultural economy and habitat that supports millions of birds.”

A transportation and infrastructure spokesperson said in an emailed statement that, “The province is committed to minimize the impact on the environment from this critical highway improvement project.”

The application outlines the expected effects on vegetation, amphibians, marine mammals, birds and other wildlife and details planned mitigation measures, the statement said. “As with any project, there will be monitoring during construction and after the project is complete to ensure existing habitat and species are maintained.”

The project also includes opportunities to make environmental improvements, including adding marshes at either end of the bridge to treat storm water runoff and create new habitat, the statement said.

Huntington said past efforts to mitigate habitat loss have generally failed and that her constituency is under immense development pressure. “Mitigation isn’t working. ‘No net loss’ isn’t working. There is a loss of all sorts of habitat.” 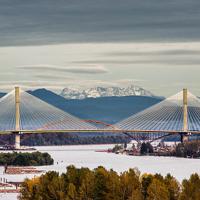 For Whom the Bridge Tolls? Mainly Working Folks

In her 11-page submission to the public consultation, Huntington detailed “unfounded assumptions and gaps in information that need to be addressed,” including concerns about the effects on fish habitat, agricultural land, traffic and air quality.

“The environmental assessment process to date is rife with both substantive and procedural inadequacies that together necessitate a reassessment of the proposed project and a full review of the analysis,” Lara Therrien Boulos at UBC and Chloe Boyle at SFU wrote on behalf of the student groups they each represent as president. “We strongly urge you to reassess the application for environmental certificate and reconsider alternatives proposed by numerous parties.”

Their concerns included the “lack of rigorous analysis of all alternatives that could result in significant mitigation of environmental impacts.”

They also pointed out that “research has identified that it is not possible to build oneself out of congestion, and that the goal of congestion-free highway travel is neither environmentally sustainable nor economically efficient” and that the project would result in increased greenhouse gas emissions.

“This [B.C.] process makes a farce of the globally significant environmental values of the Fraser River and its estuary,” she wrote.

Just over 100 submissions were made during the public consultation and expressed a wide range of opinions. While many were opposed to the project, others wrote saying the tunnel replacement is needed to ease traffic congestion.

The transportation ministry spokesperson said the project would proceed as soon as the Environmental Assessment Office issues the environmental certificate.

When Clark announced the project three years ago, she said construction would begin in 2017.