British Columbia Liberals have been trumpeting policy changes that help single parents on welfare get training and move into work, but they tend to exaggerate the success.

Here’s what Premier Christy Clark said about the program in her Sept. 10 speech to the Beans’n’Jeans fundraiser, where she was acclaimed as the candidate for Westside-Kelowna: “So far 3,350 single parents, 91 per cent women, are finding their way through our doors, off welfare and into a job.”

The program has been a talking point for Clark, who points to it as evidence that the strong economy allows the government to help people who are in need.

But while the premier makes it sound like 3,350 people have moved from welfare to work thanks to the program, the government’s Sept. 1 press release about the program makes it clear the results have been much more modest.

The relevant paragraph says, “Since September 2015, the Single Parent Employment Initiative has served nearly 3,400 single parents. About 400 people are currently in training programs, nearly 500 participants have already found employment and others are working with a case manager to best determine their future career path.”

So while the program may have “served” almost 3,400 people, the number that are in training programs is 400 and the number who've actually found work is fewer than 500. The vast majority of participants — about 2,500 people — are so far “working with a case manager.”

The uptake is also far below the number the government highlighted when it first announced the program in 2015, when it said it had budgeted $24.5 million over five years.

At that time, the press release said, “More than 16,000 single parents on income and disability assistance will... have access to a range of supports that will help break down the barriers they often face when trying to find a full-time job.” 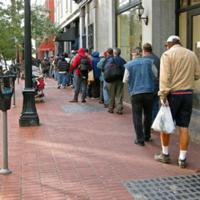 What Happened to Welfare Applicants Who Dropped from Radar?

When making the announcement, the minister responsible, Michelle Stilwell, declined to specify how many of the 16,000 people who were eligible the government expected would take part. “Our hope is that everyone who qualifies will take advantage of this opportunity,” she told The Tyee.

On the first anniversary of the program’s start, however, with fewer than 3,500 people using the program, the government’s press release quoted Stilwell saying, “I'm so pleased to see that it’s helping even more people than we expected.”

Stilwell is in Brazil competing in the Paralympics and was unavailable for an interview.

Labour Minister Shirley Bond was quoted making more modest claims for the program, by the way: “Hundreds of single parents have already found employment and hundreds more are currently training for new careers.”

The NDP’s social development critic, Michelle Mungall, said that while the program is welcome, the government has inflated the numbers since the start. “They were over promising and they weren’t working in the realm of reality,” she said.

“This is typical of the Liberals, to make something sound bigger than it is.”

The program funds up to 12 months of training for a list of in-demand jobs, while helping with child care and transportation costs. People in the program can stay on income or disability assistance while they receive training, and child care and health coverage will continue through their first year of employment.

Mungall said the NDP had a similar policy, but that participants could choose their own career instead of one “pre-selected by government” and the support would continue for a longer time. The current program falls short, she said. For example, it will support someone to become a care aide, but not a registered nurse, a profession that is also in demand but requires more training.

“They wanted to limit the expenditure essentially,” she said. “It’s good to have this programming, but it’s too limited for what we could achieve for B.C.’s economy and for single parents.”