Bureaucrats in the BC Liberal government were hoping to wrap-up some good liquefied natural gas news last Christmas. But they apparently couldn't find much to be jolly about. 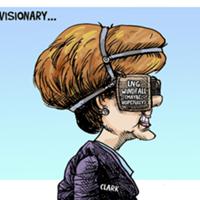 Documents released under freedom of information, after a request by the NDP, show how staff went looking for something, anything, about the slumping industry on which the BC Liberals have staked the province's future.

"Are you able to canvas key people within LNG [task force] and see if any ministry projects/developments could warrant a public announcement (news release or otherwise) over next month or so?" Beaupre wrote in an email under the subject "Anything to Announce?" to Kursti Calder, the director of policy and decision support.

In a subsequent message, Beaupre explained in detail what types of information he sought.

"Project development agreements (likely none in December but hearing others we can announce)? LNG Conference 2016-we know we will announce the dates for this sometime in the near future... Power agreements? More/other sole proponent agreements? Anything that signifies completed work by ministry that helps LNG move forward..."

Wrote Calder to her colleagues: "I am not aware of any -- do you have anything."

A news release about the four-year update to the B.C. Jobs Plan was in the works, so Beaupre asked Brian Hansen, the assistant deputy LNG minister, for help on Dec. 3.

"I have added details but would gain from ministry intel (from proponents) to verify and fill in the blanks. Can the Task Force verify and update where appropriate?"

"The previous asks for jobs numbers by LNG project has been escalated and [Minister Rich Coleman] is asking for those numbers by end of day," Manahan wrote. "Could you please let me know where your team is at in preparing that package and I will move up through Brian to [Minister's Office]."

MacDonald responded with estimates that he said were obtained from the B.C. LNG Alliance.

"These figures give an estimated total of 816 employees across seven proponents (projects). The project by project figures range from 27 employees to 321 employees and include full-time and part-time employees. Note: the projects were not identified in the information we received," MacDonald wrote. "These figures do not include the jobs associated with the ground breaking work at the Kitimat site announced by LNG Canada on December 7th, 2015. Those numbers are not yet available."

"Is this what you were expecting for numbers?" Manahan wrote.

Responded Hansen: "Not really, do they not have anything more than project 1, 2 or 3... and are they pipelines as well? Shouldn't they get on the phone to companies and get the information for this calendar year and what is going on today?"

No hype for job numbers

As for that B.C. Jobs Plan news release, it only highlighted the province's growing apparel, film/TV/digital media, craft beer and financial services industries.

Slumping natural gas prices on the global market mean the province budgeted for $128 million in royalties this year, far from the $493 million collected two years ago.

There are 19 plants proposed but proponents of the biggest, such as the $36-billion Petronas proposal, face environmental assessment and investment delays. The latest bad news for Premier Christy Clark's LNG hopes came Monday, when Shell announced the final investment decision for its LNG Canada plant proposed near Kitimat was delayed until at least 2017.

In the 2013 throne speech, the BC Liberals touted LNG exports as a potential $1-trillion industry in the next 30 years that would generate $100 billion in royalty revenues for a B.C. Prosperity Fund to pay off the province's debt. They optimistically estimated LNG would create 39,000 new full-time construction jobs and 75,000 annual full-time operating jobs.

In February's budget, that debt-fighting B.C. Prosperity Fund received its first deposit this year of $100 million -- a sum not from LNG, but diverted from other programs instead.