After a frustrating year trying unsuccessfully to get help in dealing with his mental illness, Zach* said he hopes that telling his story may help others. 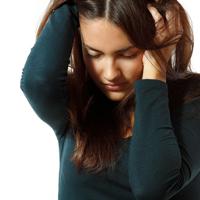 "I feel shuffled around," he said in an interview at a Victoria coffee shop. "I don't have what I need. I'm just trying to access the help that's available to me."

The waiting has made what would have been a difficult time worse, said Zach's former partner, Sarah Grantham, who remains his friend and advocate, and who was part of the interview.

Zach is uncertain what is wrong with him. He frequently breaks down in tears or feels inexplicably sad. "I just feel this deep sense of fear or sorrow," he said.

Other times, his illness feels more like anxiety or is expressed as anger, he said. "I hesitate to say 'out of control,' but I feel like I'm someone else in those moments."

Grantham looked at him.

"You are out of control in those moments," she said. She has at times felt unsafe with him, she added.

Zach said he doesn't experience warning signs. "It happens," he said. "There's no filter or progression that I can see."

Despite Zach's efforts, it's been difficult to get help.

He's been waiting since last September to have an MRI scan of his brain and it takes over a year to see a neuropsychiatrist, Grantham said.

Zach has been seen by Island Health's Urgent Short Term Assessment and Treatment program, which promises "short-term individual psychotherapy for patients in crisis, at risk, or in severe distress."

But Grantham said appointments tend to be for 30 minutes every six weeks. "It feels like they're going through the motions," she said. "There's nothing 'urgent' about it."

Recently, in crisis, Zach visited psychiatric emergency services at Victoria's Royal Jubilee Hospital three times within two weeks, but was sent away each time dissatisfied with the response. The last visit led to an appointment with a psychiatrist, but the first available opening was four weeks later.

Zach wonders if what he's experiencing is related to past concussions. "A diagnosis of some sort would be helpful for me," he said.

Instead he's without a diagnosis or a clear idea of how to go about getting better. Though he has taken drugs he's been prescribed for depression and anxiety, he said, "There's nothing that I'm working towards that I can tell."

An Island Health spokesperson took questions, but said the only person who could answer them was away. She provided an address for a health authority webpage with information for patients about how to complain about their care.

Zach, who has a university degree in social science, said his inability to get help isn't unusual. "My experience is not unique to me. I know this is happening to other people."

Indeed, such stories are easy to come by.

A Victoria optometrist participating in the Canadian Mental Health Association's Ride Don't Hide bike event on June 26 highlighted how hard it can be to get help in a widely shared email.

"As a well-documented person with mental illness I can tell you that resources like those provided by this organization are sadly lacking," wrote Neil Paterson. "These services are barely available to people of means, I can't imagine being mentally ill and poor in Victoria."

And it took five years for Christianna Shand, a Fort St. John teacher, to get help for her daughter who began expressing a desire to commit suicide. The treatment was good when she was eventually admitted to BC Children's Hospital in Vancouver, said Shand, but it was a fight to get there. "It was years of work that I did."

Her daughter, who was eventually diagnosed with bipolar disorder, was seen for a while by a counsellor with child and youth mental health services. "They saw her, but they were really strapped for resources," Shand said.

Eventually she was "kicked out" for not meeting the program's criteria, Shand said, forcing her to pay privately for care. "She really did have a problem," she said.

Falling through the gaps in care

Jonny Morris, the senior director for policy at the B.C. division of the Canadian Mental Health Association, said he was not surprised by Zach's inability to get the help he needs.

"I could probably say with quite a lot of confidence his experience is not an isolated case," Morris said. "We do have very fragmented care. There are gaps in care. It is sometimes quite tricky to find everything you need."

He said the provincial government deserves credit for making incremental shifts that improve services, such as the recent announcement of five new hubs aimed at supporting youth with mental health and drug issues.

"I don't think it's fair to say the government is inactive in this area," he said.

And there are resources like the Here to Help website, the 1-800-SUICIDE crisis telephone line and the Bounce Back program, he said.

Still, the public health care system fails to cover psychotherapy, he said, and the available mental health services are more oriented towards crisis care than community-based interventions that could better support people earlier.

And while there's a push to speed up access to knee and hip surgeries, for example, he said, mental health services are less of a priority and people can wait years for a diagnosis.

"Quite often we don't see the same emphasis on wait times for mental health services," Morris said. "I think many would agree we don't have the most proactive of systems."

Zach said that while it has been frustratingly difficult for him to get help, he's at least been lucky to have Grantham to advocate for him. If not for her, his situation would be even worse, he said.

Grantham says there are "totally inadequate mental health services here" and the failure to help people has broad consequences.

Untreated mental illness is a root cause of homelessness, she said, and a stronger system could greatly reduce the number of people who end up in that kind of deep crisis. Many people in Victoria's controversial Tent City face mental health challenges.

"If there was better mental health services in B.C., then people in Tent City wouldn't be there," said Grantham.

*Updated on June 7, 2019 at 1:24 p.m. The pseudonym "Zach" was used to protect the main source, who is concerned about stigma hurting his chances for employment.