He finally spoke to Canadians. 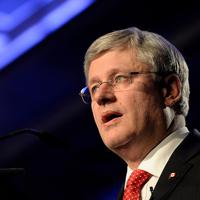 Thursday night at the Conservative Party of Canada convention in Vancouver the man who steered the party through nine years of government until being booted by voters spoke publicly to the members of his party.

"The past is no place to linger," Harper told the packed room. But which past the Tories must abandon and which to emulate is the question of the moment. Some listening to Harper's speech believe their only route back to power is by reviving the style and agenda of the Progressive Conservative party that Harper folded into his Reform Party base.

Harper had been virtually absent as a Member of Parliament, quietly showing up for votes since his Oct. 19 election defeat to Justin Trudeau and the Liberal Party.

Harper waxed optimistic and proud of what he had accomplished. "For the first time in over a hundred years, a longstanding Conservative government, even in defeat, has emerged strong and united, the one and only opposition party positioned to take the government the next time around."

But those fighting hardest to keep just that from happening find one name remains most helpful in rallying angry support: Stephen Harper. The pipeline-opposing Dogwood Initiative in B.C. is one of many groups who use the phrase "zombie Harper government" to slam policies still in effect they say are destructive to Canada.

The shadow of Harper's legacy fell across the Vancouver convention hall Friday as the Conservative Party reportedly defeated a resolution to support doctor-assisted dying and still seemed divided over the idea of gay-marriage though it's been legal for a decade.

Those are just two debates the party deals with into Saturday as it tries to right itself after October's loss. At the heart of almost any disagreement within Conservative ranks is how much of Stephen Harper should linger in in the party's soul going forward.

Slipping to the outside?

In an election where nearly three million more people voted than in 2011, including a 12 per cent turnout increase for the youngest Canadians, the Conservatives managed to earn 220,000 fewer votes than the previous election.

Studies show younger voters in Canada, and in much of the western world, lean more to the left than in previous decades and tend to be more populist.

Meanwhile, Conservatives are trying to rebuild their popularity after Stephen Harper's long, hard shift of the movement rightwards.

Harper prioritized the oil industry, passed the controversial Anti-Terrorism Act, refused to fund abortions in developing countries and proposed a telephone line for Canadians to snitch on each other if they saw a suspected a barbaric cultural practice was committed.

While Harper has stayed low on the political radar in Canada since losing the election, he gave a glimpse recently of the ideology and rough tactics he might desire for the next Conservative leadership. More than a month before his speech to a Canadian crowd yesterday, Harper addressed powerful U.S. right-wingers, and his host was an avowed supporter of Donald Trump.

In April, Harper spoke at an event for Republican big wigs hosted by casino magnate Sheldon Adelson at his home. Adelson is one of the main contributors to conservative causes in the United States, spending a reported $150 million in 2012 in an attempt to win the White House and he threatens to do it again on behalf of Trump, who has promised mass expulsion of undocumented immigrants from the U.S. and banning Muslim visitors.

While the party Harper assembled and led tries to sort out his legacy, one branch of conservatives is determined to relegate his era to the past. So toxic did this group consider Harper's style and policies, that they created the Progressive Canadian Party and ran a handful of candidates last fall.

A rebirth of the PC movement would mean a centre-right in Canada supporting environmental protection and a positive stance on social programs among other policies, the party says.

"The election result on October 19, 2015 is reason for members of the new Conservative Party of Canada to think deeply on the future of their party and on whether it really has a place in Canadian political life," said a statement released by the party this week.

"Will we see a renewed Tory party or will the party created in 2003 fail to understand the message sent by Canadians on election day 2015?"

'Betrayal' is fresh for David Orchard

But the party's leadership will likely continue to hew hard right, says a prominent member of the former Progressive Conservatives, David Orchard.

Orchard was famously misled by Peter MacKay in 2003 when the Canadian Alliance merged with the Progressive Conservatives to created the modern Conservative Party.

Orchard was running for the party leadership and dropped out to throw his support behind MacKay on the condition MacKay would not allow the merger of the two parties. Later that year MacKay sealed the deal with Stephen Harper's party.

Those who helped MacKay twist the knife still hold most of the power in the Conservative Party, Orchard told the Tyee, and that will prevent the party from shifting towards the centre.

"The ones that are there are the ones who betrayed the Progressive Conservative Party," Orchard said. "So, I don't see them moving back to the roots of genuine progressive conservatism."

To Orchard those roots include a more cautious view of trade and foreign ownership of Canadian companies, which he said is out of control due to the low dollar, as well as sound environmental policy.

He said there's a "tremendous void" for leadership on such issues while the "wholesale" sell off of Canada abroad continues.

"The government that's in power is not standing for the independence of the Canadian economy either," he said of Trudeau's Liberals. "Canadians may be looking for a genuine alternative, but I don't see it coming from the Reformatories."

Brian Marlatt, who ran for the Progressive Canadian Party in South Surrey-White Rock last autumn is more optimistic than Orchard.

Marlatt said there are many people in the Conservative party who share progressive conservative views. "Given the right moment, the right potential for a threshold for change, they will assert themselves in a positive way." he said. "We need to capitalize on that."

Just how to do that wasn't made clear by Marlatt, who admitted that the presence at this weekend's Conservative convention is minimal.

But as he talks to more people identifying with the progressive conservative outlook Marlatt said he's convinced eventually the movement will blossom.

For now, Marlatt, and others who share his view, are happy to take Stephen Harper's advice and not linger in the past that Stephen Harper created for Conservatives, and for Canada.