The British Columbia government discriminated against a woman from Sooke when it clawed back the maternity and parental benefits she received through the federal employment insurance system, says a Vancouver legal advocacy group that has filed a human rights complaint on her behalf. 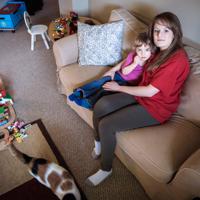 The B.C. Human Rights Tribunal ruled this week that it is in the public interest to accept the complaint for filing, even though when it was received in January it was after the deadline set out in the province's human rights code.

"My family's income went down at a time when we needed it the most," said Jess Alford in a press release from the Community Legal Assistance Society. "I was forced into a position of choosing to take leave and impoverish my family or return to work immediately following the birth of my child when I wasn't physically ready."

Alford was the subject of a profile in First Call B.C.'s 2015 Child Poverty Report Card and has had her family's case raised at the B.C. legislature.

According to First Call, Alford worked part-time at the minimum wage of $10.45 an hour and was the sole income earner for her family, which at the time included nine-year-old Mason, five-year-old Maria and 14-month-old Morganna.

Alford's husband Tony developed paralysis and fibromyalgia not long after Mason was born, and when he could no longer work he began receiving disability assistance from the province, the profile said. "Their situation is precarious. Rent and hydro consumes the majority of their total income, and counting meals is a necessity."

The provincial government's earnings exemptions rules allowed Alford's family to keep up to $12,000 a year from her job without it affecting the disability payments. While she was working, Alford paid employment insurance premiums, as other workers do.

But when she stopped working after Morganna's birth, every dollar of the parental and maternity benefits paid to Alford out of employment insurance were clawed back from her partner's disability assistance.

The policy and procedure manual for the B.C. Employment and Assistance program confirms that the government does not consider EI benefits "earned income" and they are therefore ineligible for the earnings exemption.

That policy is unfair to women, says the release from the Community Legal Assistance Society. "The complaint alleges that the B.C. government is engaging in sex discrimination contrary to human rights law by depriving women of these benefits."

Laura Johnston, the lawyer for the complainants, was quoted saying the province's policy "forces low-income working women further into poverty when they have children and that's sex discrimination."

While the complaint is specifically about gender discrimination, Johnston said in an interview, "I think the government policy choice to classify EI income as unearned is highly questionable."

"I understand how challenging it is for low-income families who are struggling to get by," she said in an emailed statement. "Our comprehensive social safety net is in place to provide temporary support to help people find meaningful work -- and to be there for the long term for those who truly need it."

As in other Canadian provinces, people are required to claim employment insurance benefits before they rely on provincial assistance, Stilwell said. "While we are always looking at ways to improve our policies, income and disability assistance is a taxpayer-funded program of last resort and is there for those who do not have access to other sources of income such as EI."

Families with children have access to greater financial support from the provincial and federal governments, including increased benefits and tax credits, she said.

Johnston said no hearing dates have yet been set, but that the government can avoid the litigation by deciding to treat EI maternity and parental benefits as earned income and allowing families like Alford's to keep them, a change she estimated would cost the province relatively little.

"It would be great if the B.C. government would just change this policy," she said.