In Montreal's chilly morning air, Isabel Heck and Gabrielle Neamtan-Lapalme survey rows of planters adorned with children's art and thick with newly sprouted seedlings. Around them, laundry hangs from fire escapes on dilapidated apartments. A daycare worker leads a dozen small children past, strung along a safety rope. 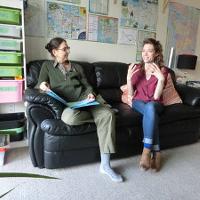 It was in a similar lot nearby, one still bare asphalt, that in 2008 two police officers confronted a group of teens playing dice -- against city bylaws. In the ensuing confrontation, 18-year-old Honduran immigrant Fredy Villanueva was shot dead. Against his family's calls for calm, local anger boiled over into rioting and widespread looting that caused $1 million in damage. The violence fuelled debate over Montreal policing and racism in the municipal force.

The neighbourhood, Montreal North, remains one of the poorest and most densely populated in the city: 215 people live on every hectare here, five times the number for Montreal overall, most in low-rise two- and three-storey walk-up apartment blocks. One-quarter speak a language other than French or English, and unemployment is three times the Canadian average. Half of households spend more than 30 per cent of their income on shelter, beyond Canada Mortgage and Housing Corporation's definition of what's "affordable."

Quite a lot further, in fact. The society is a central piece in a pioneering new take on community planning: one that starts with the "community" instead of the "planning."

Neamtan-Lapalme's organization has teamed up with Parole d'excluEs ("Voice of the Excluded"), a community mobilization group, to bootstrap resident-driven urban planning that aims to transform the neighbourhood from the ground up.

The first step, she said, was to listen to what the neighbours say, rather than to the latest well-meaning solution from city hall.

A Montreal city planner who works with organizations in Montreal North admitted that in the past, "there was never any kind of consultation with people. Not even planning really -- no consultation process, no co-design." The planner, who requested anonymity because he was not authorized to speak to media, said that had now changed. For the past two years, they said: "We've been experimenting with all of these things."

Being invited to speak up was new to many in the neighbourhood who "are not used to having much power," said Parole d'excluEs' Heck. "But people with lived experience of poverty have lots to say about their experience -- and about solutions.

"In this neighbourhood," Heck added, "it wasn't possible to only work with bricks. We had to have a component to address the social problems, too."

To document people's needs, concerns and ambitions for their community, Parole d'excluEs and SHAPEM set up a staffed drop-in space in a vacant suite in one of the provincially owned apartment blocks SHAPEM manages. Anyone can stop in, even if they don't live in a SHAPEM building.

"It's an open space where people can come, discuss and think about what kind of collective action they could do," said Heck. "It's a place in the neighbourhood where people can exchange [ideas], and we can establish ties with them and build trust. Because it's from that point where we start to reflect on solutions."

And while keeping affordable, secure and safe housing is certainly a priority for many of the large, low-income families who call Montreal North home, Parole d'excluEs documented other worries that would normally not reach city planners.

"People came and said, 'Housing is good, but now I'm hungry -- so what can we do?'" Neamtan-Lapalme recalled.

But the groups didn't see their task being simply to take notes and pass them along to city officials, or as empty exercise in letting residents vent.

Instead, Parole d'excluEs staff posed a simple question back: "What do you think you can do?"

In 2012, the persistent question prompted the many residents who had been complaining about the lack of low-cost grocery stores in the neighbourhood to launch a Food Security Monitoring Committee, elected by and from local residents with the non-profit's support.

The committee created a food-buying co-operative that takes advantage of bulk order discounts that would normally be out of reach for cash-strapped families living paycheque to paycheque.

Another complaint was those barely occupied parking lots between apartment buildings. With SHAPEM's support, the committee turned one into vegetable and herb garden plots, where Heck and Neamtan-Lapalme met me.

Children decorated a tool shed with sunny, pastoral scenes and the words, "Welcome to Canada and Quebec" in English, French, Arabic, Spanish and other languages. More messages carried thoughts of countries with words like "I love you Haiti."

Residents haven't stopped there. "Now they're planning a whole food system for everyone," Neamtan-Lapalme boasted, "one that's trying to compete with the dominant food system."

To that ambitious end, the neighbours are building on their collective expertise in cooking, canning and preserving, and the produce of their urban agriculture experiment, to launch a mobile farmers market, a revenue-generating food processing business, and they hope eventually, a co-operatively run grocery store.

It's not all about food, either. The neighbourhood's residents also identified a lack of daycare spaces for their children, many of them raised in larger-than-average, immigrant families whose parents struggle to balance precarious employment and child care.

In response and with non-profit support, they created a daycare operation in a community centre and are working on another, permanent facility.

Yet another Parole d'excluEs initiative connects individuals to exchange their time and skills. "An hour from you is as valuable as an hour from me, even if you have a diploma or special skills," Neamtan-Lapalme explained. "If I take care of your children for an hour, and you repair my car, we're still worth the same."

Hundreds of young trees greening the concrete-dominated neighbourhood are another neighbourhood project, and community workers say there's an unusually high level of pride in, and sense of shared responsibility for maintaining, the new plantings.

Not all the good ideas here have come from the ground up. "We believe in croisement des savoirs (combining knowledges)," Neamtan-Lapalme said.

To that end, SHAPEM and Parole d'excluEs have invited people from local universities to share the latest research on local economic development -- insights hitherto unavailable to the nearly four-in-10 Montreal North residents who lack a high school diploma, a figure 18 per cent higher than the city-wide average.

Likewise, Heck said the emerging alternative food system isn't just about nutrition. It's also about neighbours supporting each other, and hopefully creating an informal safety net from a strengthened fabric of mutual trust.

"This is about people transforming their neighbourhoods," she mused, "not just giving an apartment to someone and saying, 'Now shut up, you have your apartment.'

"We believe housing is not an end; it's just the beginning of social transformation."