Having slipped to having the lowest minimum wage in the country, the British Columbia government announced today that it will raise the pay for the province's lowest paid workers twice over the next 18 months. 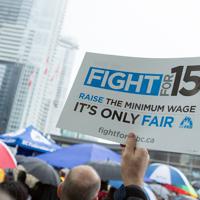 BC Now Has Lowest Minimum Wage in Canada

"It means about $1,400 more in your pocket if you have a full-time minimum wage job," said Premier Christy Clark.

The premier also said that while some people work full time for minimum wage, they usually stay at that pay level for less than a year, according to the government's statistics.

The government's figures say 55 per cent of minimum wage recipients lived with their parents, while 23 per cent were part of a couple, 13 per cent were unattached and eight per cent headed a family.

Noting that B.C. is projected to lead Canada in economic growth this year and that the government has run balanced budgets for four years in a row, Clark said the minimum wage will go up from the current $10.45 per hour by 40 cents this September and a further 40 cents a year later.

The increases are larger than they would have been if the government stuck to a previous pledge to tie raises to the increase in the cost of living.

"With an economy growing this fast, we should absolutely make sure that people earning minimum wage in our province are doing better than they are today," Clark said. "We want to make sure everyone shares in that dividend. There is a reason to balance the budget and that is so we can create a fairer and more just society."

Clark said the increases will give B.C. the third highest minimum wage in Canada, though her labour minister Shirley Bond later allowed that workers in other provinces and territories will likely have raises before then.

"What I expect [is] by the time we get to September of 2017 we'll be in the top half of jurisdictions in the country," Bond said. "I think that's an appropriate place for British Columbia to be considering our economic circumstances."

The increase the government announced is not enough, said Irene Lanzinger, the president of the BC Federation of Labour, which is campaigning to raise the minimum wage to $15 an hour.

Pay of $10.85 an hour would leave somebody working full time with an annual salary that is $5,500 below the poverty line. "It's not enough to lift a worker out of poverty, which is what we say needs to happen," Lanzinger said. "We have to have a plan to get to a wage that is above the poverty line."

Lanzinger said there are many workers who are paid the minimum or only slightly higher. "Twenty-seven per cent of the working population in British Columbia, more than a quarter of the workforce, 500,000 workers, work for less than $15 an hour," she said. "Those are not all kids living in their parents' basements."

They include mothers, fathers and families struggling to make ends meet, she said.

Polling done for the BCFED found 76 per cent of British Columbians support a $15 an hour minimum wage and 83 per cent agree nobody who is working full time should live in poverty, she said.

"I think the announcement was damage control," said Shane Simpson, the NDP's labour critic. "The government had fallen to last place in the country. Clearly that was a problem for the premier and she was scrambling to fix the problem and that's what we saw today."

After this year's increase, B.C. will still have a minimum wage that's in the lower half among Canadian provinces and territories, he said.

Simpson compared the raise to the $50,000 that the BC Liberal Party pays Premier Clark on top of her taxpayer-funded salary. "People on minimum wage will still be earning considerably less than half the premier's top up from the BC Liberal Party," he said.

"The premier is struggling by on $200,000 a year, she needs a $50,000 top up, and somehow she thinks it's okay people who are on minimum wage will be struggling to stay out of poverty."

The NDP is consulting on how big future increases should be and when they should be implemented, Simpson said. "We'll be determining that, and we'll be telling people before we get to election what our views are on how the minimum wage should unfold heading forward."

Along with the minimum wage announcement, Clark said the government is committed to reducing the tax rate for small businesses from 2.5 per cent to 1.5 per cent and is putting $2.8 million into job training programs.