Postal workers are touting a major court victory as another important roll-back of Stephen Harper's legacy. 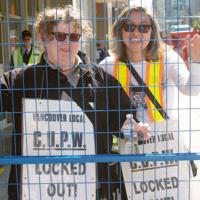 The Ontario Superior Court ruled on Thursday that the former Conservative government "infringed the [Charter] freedom of association of union members" and their freedom of expression in 2011, when it "abrogated the right to strike" with back-to-work legislation during a Canada Post labour dispute.

The decision came just three weeks after Canada Post requested a government-appointed conciliator for bargaining, which "starts the clock ticking" toward another strike or lock-out this summer, the national president of the Canadian Union of Postal Workers (CUPW) warned in the judgement's wake.*

"Absolutely we're getting ready," Mike Palacek told The Tyee in a phone interview. "We're making sure our members are aware that it looks like management wants to lock us out again.

"We're telling people to get ready for that eventuality. If they want to go that route, we'll see them on the picket lines."

Canada Post did not return requests for an interview nor provide comment on either the court's decision or the state of its negotiations with the union.

The Crown corporation had argued in hearings last October that, were CUPW's court challenge to succeed, it "would upset the balance between workers and employers by giving unions a distinct and lopsided advantage," as well as "generate significant uncertainty as to whether legislatures can replace industrial action with binding interest arbitration."

In his scathing ruling, Justice Stephen Firestone found that the Tories' Restoring Mail Delivery for Canadians Act did the exact opposite.

"Far from putting the parties on an 'equal footing,'" Firestone wrote, "it instead created and exacerbated an imbalance between the parties that had not existed before the legislation was tabled on June 20."

The judge also criticized the penalties imposed on anyone not complying with the legislation, including those refusing to work or encouraging others not to do so. Those fines were $1,000 for every day an individual broke the law, $50,000 a day for a union representative, and $100,000 for CUPW as a whole (or Canada Post, if it breached the law).

Firestone concluded that the severity of the fines pushed the union to soften its demands and "hardened" Canada Post's position.

"There can be no question that ... the Restoring Mail Delivery for Canadians Act abrogated the right to strike of CUPW members," Firestone ruled, "stifling legitimate dissent and criticism by workers about their conditions of employment, their solidarity among themselves as a group, and their individual emotional health and sense of self-worth."

As a result, Firestone concluded, the law's effect was "to substantially interfere with -- and to disrupt the balance of -- a meaningful process of collective bargaining."

"The right to strike promotes equality in the bargaining process" between workers and employers, he wrote, "a relationship that is structured by long-recognized and deep inequalities."

Palacek agreed that his union had been forced to accept contract concessions because of the legislation "that we never would have agreed to had that entire process not been hanging over our heads," he said. "We were faced with being forced to accept something even worse.

"Without the threats of those fines hanging over our heads, the results may have been different."

The union head said he's "heartened" by the judge's ruling. And with a new round of bargaining evidently already on the rocks, Canada Post filed a notice with the Minister of Labour on April 4, requesting she appoint "conciliators" to oversee future talks.

"We are taking this step because while the parties have been meeting since late 2015, we are not seeing progress on key issues," the corporation said in a statement at the time. "We hope that a neutral party can stimulate constructive discussion and accelerate the negotiations process.

"We remain fully committed to negotiating new collective agreements that are fair for our employees while also reflecting the changing nature of our business and needs of our customers."

Amidst escalating tensions, the union posted an article on its website Thursday that portended strife to come: "Seven things you can do to prepare for a labour dispute," read the blog post's headline.

But based on what he's heard from MaryAnn Mihychuk, federal minister of Employment, Workforce Development and Labour, Palacek said he expects the federal government won't be so quick to rush to Canada Post's aid this time.

"The minister of labour has been quite clear that the government will not be intervening in labour disputes," he said. "Canada Post can't expect to simply lock us out and have us legislated back on their terms.

"But it's still the same Harper-era appointees running Canada Post right now. I'm not sure they care what the position of the government is."

Of course, ratcheting up rhetoric through the media is a gambit both sides sometimes use to raise the pressure for a settlement at the bargaining table. So what are the chances Canadians might soon have to endure another stand-off like the one five years ago?

"Unless things change at the bargaining table," Palacek said, "I'd say the chances are pretty good."