Less than a month after working his last day as Premier Christy Clark's press secretary, Sam Oliphant named Clark as one of two cabinet members he intended to lobby on behalf of a Toronto-based healthcare app developer. 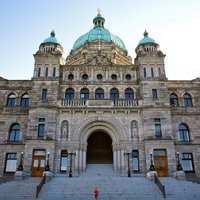 PR Advice to BC's Lobbying Industry: Clean up Your Act

Oliphant filed with the Office of the Registrar of Lobbyists for Think Research from March 23 to Jan. 1, 2017, to help Think "get their products used by the B.C. government." Health Minister Terry Lake is the other target contact.

The registration mentions Oliphant was Clark's press secretary from July 15, 2013 to Feb. 26 of this year. It does not mention that he was a researcher for the Liberal caucus in 2011 or that he worked as the spokesman at BC Liberal headquarters in 2012 and 2013.

Oliphant filed under Oliphant Public Affairs, whose website he registered on Feb. 11 while he was still working in the Office of the Premier. All of which is perfectly legal in British Columbia, which has no rules to stop close aides to cabinet members from instantly switching careers to lobbying their former bosses.

Oliphant has also become a senior communications advisor for Kirk & Co., the BC Liberal-allied Vancouver public relations company that holds several high-profile provincial contracts, including one with BC Hydro's Site C dam project. The company's senior associate, Mike McDonald, is Clark's former chief of staff and the party's 2013 campaign manager.

Oliphant did not respond to phone calls, but by email explained he is working "as an independent consultant" under his sole proprietorship. "I work with a variety of clients, Kirk & Co. among others, to provide services from communications support to strategic advice," he wrote.

Oliphant is not the first Clark aide to cross the street into a lobbying job.

In late October 2013, Gabe Garfinkel left the Office of the Premier to join FleishmanHillard as an associate vice-president. Garfinkel was Clark's executive assistant since September 2011 and was promoted to director of community and stakeholder relations for ethnic communications after the May 2013 election.

Garfinkel began lobbying sooner than Oliphant. His first target was not Clark, but instead Energy Minister Bill Bennett. Garfinkel began an undertaking for EDF EN Canada on Nov. 1, 2013. Since then, he has represented Chevron Canada, Multi-Material BC, Port Metro Vancouver and Hoffmann-La Roche. His current clients are Vertex Pharmaceuticals and Lifescan Canada.

Meanwhile, former deputy minister Dana Hayden, who quit as BC Pavilion Corp. CEO in January 2014, has a pending registration to lobby various cabinet ministers and PavCo on behalf of Westbank Projects Corp. "to initiate the disposition of land held by the BC Pavilion Corp." Hayden was appointed by the BC Liberal government to chair Partnerships BC, the government's infrastructure and privatization middleman.

Westbank owner Ian Gillespie also owns the Creative Energy steam power plant next to BC Place Stadium. He wants to move the plant to False Creek Flats and build a tower on the property.

Nothing wrong with cool down period: registrar

"Nevertheless, a cooling-off period could give 'hot' policy issues a chance to move along to the point where the current knowledge of a former public office holder would no longer be of advantage."

Travis said the undertakings by Oliphant, Horne and Hayden are further evidence that B.C. is "becoming a closed shop for the BC Liberal family."