When media talks about fulfilling the Truth and Reconciliation Commission's Calls to Action, the list of 94 changes to jumpstart reconciliation between Indigenous people and the settlers of Canada, the onus is placed squarely on the federal government to implement them all. 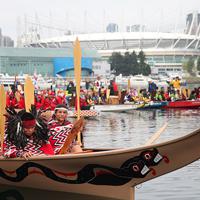 Reconciliation: What Are Our Next Strokes?

But the feds can't do it alone. Although they actually served to destroy children's identities, the church- and state-run residential schools that First Nations, Inuit and M&eacutetis children were forced to attend from 1884 until 1948 (with many continuing in the system until the last school closed in 1996) were on the surface meant to educate. Keeping this in mind, it's a fitting response for Canada's universities to have a big role in reconciliation.

This was Justice Murray Sinclair's message during the Hewitt Bostock Lecture he gave at the University of British Columbia's Green College on Friday, March 18. The Truth and Reconciliation Commission chair, whose appointment to Canada's senate was coincidentally announced the same day, spoke of how both the residential and public education systems have hid the horrible legacy and propagate stereotypes of Indigenous peoples as "savage."

It's a worldview that hurts everyone, he said: "The way that we have all been educated in this country... is the reason why we are at the state that we are today, to the point where the psychological and emotional well-being of aboriginal children has been greatly harmed."

But education is also the solution, a sentiment shared by Sinclair and the four Indigenous female University of British Columbia academic panelists who followed his speech. Starting with accounts of the marks left on their lives from education, each panelist discussed what they and their Indigenous colleagues are doing to counteract this neglect by post-secondary education.

"That's where were can have control," said Dr. Nadine Caron, co-director of UBC's Centre for Excellence in Indigenous Health, referring to the TRC recommendations. "That's where as an Indigenous faculty at this university, I think, we need to move that agenda forward. And that's what we're going to do."

Even though his older brother and sister were much smarter, Sinclair was the only one to graduate from public school because his siblings were pushed out by the lack of respect they and their culture received, he said.

It's a system that Sinclair says is still in place, evident in a scan of residential school lessons in the Canadian kindergarten to Grade 12 curriculum from 2011. Results of that scan showed problems, ranging from the lessons being old and out-of-date to the hardly better example of the incomplete updating of the curriculum, he said.

Ignorance of this history continues to have a devastating impact on Indigenous youth, Sinclair said: "If you do not believe this, then you do not understand the implications of the continuing high dropout rates of aboriginal children in the public schools of this country."

At the university level, changes are also slow coming. But Caron says the final TRC report and Calls to Action have become the "bow and arrow" academics need to convince their faculties of the importance of mandatory cultural awareness training. She used the report to achieve this training for all first-year medical students.

"We just said that there couldn't be a worse time in history to not listen to what we are asking for. You have no grounds to stand on -- you can't turn anywhere in this country and have any justification for not doing the simple thing that we're saying to do," Caron said.

It was an uncomfortable conversation, she acknowledged, before adding with a smile: "I actually had a good time."

There is also a mandatory aboriginal law course for first-year law students, though law professor and Chippewas of Nawash member Darlene Johnston noted it wasn't enough time to cover everything.

"We have to really rely on our colleagues to take up the work as well, both in first year and every other year," she said, acknowledging a colleague who opened up their criminal law syllabus to include issues impacting Indigenous people.

In many ways, however, changing universities can feel like an uphill battle. Aboriginal professors are taking up the charge but while some receive support for their ideas, the educational institutions themselves don't always put their power behind achieving reconciliation's goals.

Speaking to The Tyee after the panel discussion, Alanaise Goodwill, an assistant professor in the Faculty of Education who specializes in counselling, said she was ashamed of the lack of support UBC has given to teaching and preserving Indigenous languages.

"There's a real stagnation in this dialogue," she said. "The one recommendation that was a direct call-out to post-secondary education was to offer university and college courses in Indigenous languages."

UBC, Goodwill noted, does have three professors in an Indigenous language program in the Faculty of Arts. But efforts to create language classes, or collaborations with other faculties and programs like her own to, for example, teach counselling in Indigenous languages, don't have institutional power behind them, she said.

She and other professors on the panel spoke of their desires to see universities give professors the supports to create these courses; to support more research in Indigenous issues like health and language renewal; and hire elders or middle-aged Indigenous academics with arguably more cultural knowledge than their younger counterparts -- especially those who can speak their languages.

"That would be power," Goodwill said.

Continuing education for those already in the field -- lawyers, doctors, teachers, psychologists, or any other professional working with or impacting Indigenous lives -- is also important. Caron noted that if first-year medical students are obliged to take Indigenous cultural awareness training, then all practicing doctors should, too.

"One other thing that we did at the Centre [for Excellence in Indigenous Health] this year was a tiny step, but it was [adding] a mandatory question at the College of Physicians and Surgeons in B.C. this year," Caron said.

"If you wanted to have a license in British Columbia as a physician, you had to answer the question, 'Have you taken an Indigenous cultural awareness course?' You had to answer it -- if you didn't answer it, you didn't get your license. At least that's a start."

Physicians don't have to take an Indigenous cultural awareness course in order to get their license, but including the mandatory question introduces the courses to physicians unaware of their existence.*

The panelists did acknowledge the work universities are doing, including the in-development Indian Residential School History and Dialogue Centre at UBC's Vancouver campus, which will provide education, research and public engagement opportunities regarding residential schools.

The centre, still in the project development phase, is similar to a lot of the changes recommended in the Calls to Action, noted Sarah Hunt, a professor of geography, First Nations and Indigenous studies, and a Kwagiulth scholar. But they will take time to be put in place.

But reconciliation can't wait and neither should we wait for institutions to make their slow, lumbering steps, she said.

"There's many, many, many individual stories, and for myself, I think we need to sit with some of those stories," said Hunt. "My own understanding of residential schools has come from hearing people's stories, and I think until we can sit with the uncomfortable truths, the lived experiences that people have, those inform how we put those [recommendations] into action."

As every speaker, and many of the audience members who asked questions noted, the hard work of finding those stories has been done by the TRC. Over its six years, the TRC released several smaller and one final large report detailing survivors' stories, government and church documents, and solutions for the future.

Canadians, much like the educational institutions we've created, no longer have the luxury of claiming ignorance about Indigenous people and the traumas we inflict upon them. Reconciliation starts with institutional acknowledgement of the wrongs, but much of the heavy lifting -- and re-education -- will have to be our own.