The major increase in the number of young people who voted in the Oct. 19 election should serve as a warning to politicians that they cannot ignore young Canadians, says a student association spokesperson. 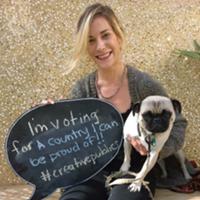 According to the results of a labour force survey released by Statistics Canada last week, voters 34 and under saw a big boost of 11.5 per cent at the voting booth despite another 9.5 per cent saying they were hindered from voting by electoral rules.

Jenelle Davies, secretary-treasurer of the British Columbia chapter of the Canadian Federation of Students said the high turnout also means the government would be wise to remove voting barriers and listen to young Canadians.

"I think that election was a good indicator that folks should be worried about youth coming out and politicians should heed that," Davies said. "Students came out to the polls for particular issues and they voted for politicians they thought would do the best on the issues."

She said the environment and the federal Anti-Terrorism Act, which opponents say enables the government too much power to spy on Canadians, were two of the major issues that propelled students to the ballot box.

Her observations fall in line with a report Saskatchewan professor David McGrane released in 2015 detailing how Canada's youth are more socially progressive than in previous years.

Since the last election Canada's youth have carved out places online, such as Facebook, where they can discuss and learn about issues, which Davies said leads to more engaged youth.

Elections Canada official John Enright told The Tyee apart from a pilot project that visited some campuses, there were no changes to how the agency approached youth voting compared to the 2011 election.

The Statistics Canada figures show while voting numbers increased across all demographics, voters aged 18 to 24 saw the biggest increase at 12 per cent.

That's just shy of 10 per cent fewer than the next two age groups, who only saw a combined eight per cent rise in voters.

The smallest bump was among voters 65 and older. Turnout grew one per cent in this group.

Despite high youth turnout, 9.5 per cent of Canadians aged 18 to 34 reported not voting because of "electoral process related issues."

Davies suggests changes to identification requirements, which have been a source of controversy since 2008, could be to blame.

"We did hear reports of issues that young people had with voting especially around the ID requirements," she said. "We had some folks saying they had proper ID at the polling station but they were denied."

Students argue the rule impedes their right to vote, as many have just moved to a new home for school and don't have time to establish residency and get proper ID before an election.

It's a move critics say was done intentionally by the former Conservative government to suppress young people who aren't likely to support them.

Student unions across Canada have been fighting the changes since they came into place.

The battle includes the Canadian Federation of Students teaming up with the Council of Canadians for a charter challenge of the legislation in Ontario Superior Court launched in 2014.

Staff for Minister of Democratic Institutions Maryam Monsef did not agree to an interview this week, but said the new Liberal government will be addressing voter concerns.

"Our government has committed to amending the Canada Elections Act with the goal of protecting the fairness and integrity of our elections," said press secretary Jean-Bruno Villeneuve in an email.

"In particular, the minister has the mandate to repeal the elements of the Fair Elections Act which makes it harder for Canadians to vote."

Regardless of any promises from the federal government, Davies said students will continue to fight the legislation.