University governance experts say the University of British Columbia's board of governors didn't break any rules when they met secretly with then-university president Arvind Gupta to discuss his leadership style prior to his resignation last August. But faculty members say rule breaking isn't the issue, and have called for an external review to address the board's lack of transparency. 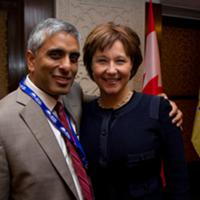 What Was BC Government's Role in UBC President Purge?

UBC Faculty Association president Mark Mac Lean says the board of governors' actions in handling Gupta's resignation have remained shrouded in secrecy over the past six months. He's one of an estimated 200 to 250 faculty and students that took their demands for transparency reforms to a board of governors meeting Tuesday.

"If this is a normal board to have secret meetings that aren't recorded, then I think we need to change that," he said, clarifying in-camera meetings are fine as long as they're marked in the board's public calendar. Mac Lean added efforts to meet with the board's governance committee have gone nowhere.

Retired educational studies prof William Bruneau says the board has the right to keep any matters relating to personnel in camera. The issue, says Bruneau, is that confidentiality rules around personnel and real estate matters are often applied as broadly as possible, keeping university communities in the dark.

"That's one of the problems of boards' of governors across the country," he said. "If you paint broadly enough, you could make almost anything in-camera."

New documents related to Gupta's departure released last week shed light on a series of secret meetings held by an ad-hoc board committee who advised -- and criticized -- Gupta on his work. The records accidentally included attachments of un-redacted emails about Gupta's progress as president between Gupta and then-board of governors' chair John Montalbano.

Records suggest those meetings happened in place of the formal performance review called for in the president's contract, which would have involved input from faculty, staff and students, said Mac Lean.

With UBC celebrating its 100th anniversary this year, and the search for a new president headed for a June hiring deadline, growing scandal is overshadowing what should be a year of celebration, he said.

What are the rules, anyway?

Just who's in charge at UBC -- or any university in Canada, except Alberta, which has its own act with "slightly different" board rules, says Bruneau -- depends on who you ask.

The board of governors is responsible for the administrative side of the university: its $2 billion budget, staffing and real estate acquisitions, though they are expected to consult the university community and wider public on these issues, too. While the presidential search committee recommends a new president to hire, the board have final say. Once hired the president consults the board on all financial and real estate matters.

Mac Lean said the faculty association tried to file an official complaint to the board, but found no policy exists to direct that process. He added there were few policies directing the board's actions that he could find.

In an email to The Tyee, university counsel Hubert Lai said all board policies are searchable on the university counsel website. Rules that do exist for board meetings state that special committee meetings, including the board's audit, employee relations and executive committees, are closed to the public.

Reviewing existing and creating new policies, Lai added, is an open procedure involving a review committee made up of faculty, staff and students, with the opportunity for the entire university community to provide comments via an emailed invitation.

The university senate, chaired by the president, is composed of elected staff, faculty, student and community representatives, who are in charge of all the university's academic matters. Then there's the committee of deans, lead by the university's provost, responsible for steering the academic direction of their departments, overseen by the president. According to the documents released by UBC former chair Montalbano told Gupta his relationship with the faculty of deans was not "at a functional level."

"For the university to run effectively, efficiently -- which, of course, is the board [of governor's] charge," said educational studies professor emeritus Donald Fisher, "the deans and the central administration have to have confidence in the president."

"If the criticism gets to the stage where there is a loss of confidence -- and that's the language that's used in the documents -- then it's pretty difficult for a president to do the job."

But while the board didn't break any rules, the emails can be interpreted as micromanaging then-president Gupta, says political science professor Michael Byers, who also taught at Oxford and Duke universities.

"I've been the personal friend of presidents at Oxford, Duke and UBC," said Byers, adding he didn't know Gupta. "And I can't imagine any president tolerating the kind of treatment that we see in some of this documentation."

And for a university in the midst of searching for a new president, a micromanaging board can be disastrous for their reputation, said Byers. At the very least, he added, there should be a change in board members, which might necessitate the Advanced Education Minister Andrew Wilkinson or even Premier Christy Clark's involvement.

In a statement emailed to The Tyee, Minister Wilkinson said, "UBC is an autonomous institution under the University Act. Government has no intention of interfering in board activities at UBC as it would not be appropriate."

Former board chair Montalbano left the board last October following allegations he interfered in the academic freedom of Sauder School of Business professor Jennifer Berdahl last summer, even though an independent investigation cleared him of wrongdoing. Berdahl's position is funded by Montalbano's $2-million donation to UBC. The Tyee's requests for Montalbano's comment went unreturned.

But board member Greg Peet and university chancellor Lindsay Graham, both named in the un-redacted documents as attending a secret meeting with Gupta regarding his performance, currently sit on the 21-member presidential search committee. Mac Lean would like to see them replaced because the optics of them choosing the new president are bad, adding it's the integrity of the process, not the credibility of the individuals involved, that's at stake.

"We don't know anything around what they did or didn't do, whether it was appropriate or not, and to sort out that question and the questions of governance of the university, and to carry on a search for a new president," said Mac Lean, "we have to separate those processes. And I think the only way to separate them is to separate the people who are involved out of those processes."

Mac Lean says he would like to see a president's advisory council established, too, a body separate from the board and senate set up to advise the president. The faculty association is expected to release all of their demands for the external review process in a letter to the board this week.

Several faculty members have already made demands, including an external review and audit of UBC governance, changes to the University Act to decrease the number of appointed and increase elected board members, a recall of all current appointed board members, bans on secret governance meetings, and a new strategic plan process.

Those demands reached the doors of a board of governors' meeting at UBC's Vancouver campus Tuesday, Feb. 2. Mac Lean says he has never seen UBC faculty protest, except in solidarity during staff strikes, since he started at UBC as a student in 1989. Of the couple hundred faculty and students attending yesterday's protest, a smaller group of 20 met briefly with the board according to the Ubyssey student newspaper, after their protests became too loud for the board to conduct their meeting.

"Faculty have a very broad set of perspectives. Usually you'll get lots of people on all sides of an issue. These days it's uniform," he said.