The federal government has decided to prosecute the company that spilled 33,000 litres of jet fuel into Lemon Creek during a firefighting operation in the summer of 2013. 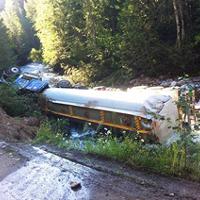 Anatomy of a Jet Fuel Spill

"I can confirm that a decision regarding intervention has been made and the nature of that decision will be communicated at the next court date," wrote federal prosecutor Todd Gerhart in an email to the Star. "That date has not yet been scheduled but is in the process of being arranged."

He said he expects that initial court date to be within the next few weeks. The charges against Executive Flight Centre are for violating Fisheries Act provisions that prohibit polluting a stream.

The decision means that Slocan Valley resident Marilyn Burgoon can drop the private prosecution that she has been pursuing since the fall of 2014, because, she said, it appeared the federal government was not going to prosecute. Now she says she will be spared having to raise tens of thousand of dollars in legal fees.

But from Burgoon's perspective there is a possible downside. She says that on the rare occasions that the government does take over a private prosecution, they sometimes simply drop the charges.

"But I am optimistic, with the new government, that they will not stay the charges and will proceed with the prosecution," she told the Star. "A new government with a new fisheries minister and a new attorney general (and both are First Nations people), this gives me encouragement because First Nations understand fisheries."

Asked by the Star for the reasons behind the decision and whether the provincial government will be named as a defendant as it was in Burgoon's private prosecution, Gerhart said he would be open to such questions after the upcoming court date.

Andrew Gage, a lawyer at West Coast Environmental Law in Vancouver, says he is encouraged, but cautiously, by the federal government's move. He said that since the spill the government has been "dragging its feet" but he thinks the new government might take a different approach to the case.

"The new government seems to want to signal that it is more interested in seeing environmental enforcement than the previous one," Gage said. "We saw a change of direction in Paris, although that is a different issue obviously, and we saw the mandate letters to different ministers including direction around environmental law that are in the right direction. They have been talking the right talk."

In the meantime, there are two other court actions pending related to the spill. Executive Flight Centre is suing Transwest Helicopters and the provincial government for giving its driver incorrect directions to the fire where the fuel was to be used. In addition, a class action suit filed by Robert Kirk on behalf of 2,776 property owners will come before a judge in September. The defendants are Executive Flight Centre, its driver Danny LaSante, the provincial government, and Transwest.