The BC Liberal government has moved the goalposts yet again on its promise of a million new jobs. 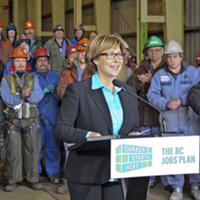 In July 2011, four months after Christy Clark was sworn in as premier, a government news release on the 2010-2020 Labour Market Outlook said "over 1 million job openings are expected in B.C. by 2020."

The government stuck with that forecast until April 2014, when it released its Skills for Jobs Blueprint. The one million job openings would not be coming until 2022, the government said. Its October 2014 forecast was more specific: "From 2012 to 2022, 985,100 job openings are expected in the B.C. labour market."

The government was still touting those numbers this fall. In September, the @BCJobsPlan Twitter account confidently proclaimed "By 2022, there will be one million job openings in #BC." On Oct. 15, the government tweeted "By 2022 #BC is expecting ONE MILLION job openings, are you prepared?"

But the numbers changed again Oct. 30, when the government released a new Labour Market Outlook with an introduction from Jobs, Skills Training and Economic Development Minister Shirley Bond.

Bond wouldn't be interviewed on the changing job forecasts.

Gabrielle Price, a communications staffer, sent an email statement attributed to Bond that said the government is "using more and more refined data."

"The job openings in the outlook change with each release because the underlying conditions in the economy change," the statement said. "Project timelines get adjusted, people's work intentions change... We also make adjustments based on fluctuations in global and national economies, retirements, deaths as well as economic growth."

The rate of new job creation has lagged the forecasts. Clark's first full month as premier was April 2011. In the four-and-a-half years since then, 110,000 jobs have been added.

NDP labour critic Shane Simpson said Clark "has been sloganeering since the day she was elected" and her Jobs Plan hasn't worked. The million jobs projection, he said, "doesn't have much substance to it."

"She hung her hat on LNG, which we all know how successful that's been," Simpson said. "Now they're grasping at technology and they're asking the federal government to pay for infrastructure to create a few jobs."