Ssssss...like air slowly escaping out of a bicycle tire, British Columbia's economy is leaking jobs -- and workers are losing hope -- each day that Christy Clark sits in the premier's office. 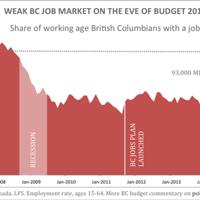 Released on May 8, the latest Labour Force Survey from Statistics Canada should give pause to even the most devoted and enthusiastic BC Liberal supporter.

Of that number, 17,500 were full-time positions, with the remaining 11,300 being part-time. (All numbers cited here are on a seasonally-adjusted basis.)

The province's labour force -- that is, the number of British Columbians 15 years and over who either have a job or actively are looking for one -- plunged by 18,000 in a single month.

As many of us have come to expect, the dismal Statistics Canada report largely was ignored by both B.C.'s news media and provincial politicians.

Shirley Bond's Ministry of Jobs, Tourism and Skills Training, which used to issue news releases trumpeting all real and imagined successes of Clark's Jobs Plan, is maintaining its months-long silence on employment data collected by the nation's independent statistical agency.

The provincial Employment Rate -- the portion of B.C.'s labour force with either a full- or part-time job -- collapsed in April to just 58.5 per cent.

That's the lowest number in 13 years, dating back to the downturn that hit North America in the months following the Sept. 11, 2001 terror attacks on the World Trade Center in New York City and the Pentagon in Washington, D.C.

Simply, over the last four years under the leadership of Clark and the BC Liberals, it seems the province's employment landscape has regressed back to a nadir recorded during an economic recession.

It was four years ago that British Columbians watched Clark settle into the Office of the Premier. The former radio-talk show host captured the BC Liberal leadership on Feb. 26, 2011, and became premier on March 14.

Over the last four years, Canada's population expanded by 4.5 per cent, while B.C. lagged behind at 3.9 per cent.

Whereas our province in the first quarter of 2011 was home to 13.12 per cent of Canada's entire population, after four years we've slipped to 13.05 per cent.

No big deal, perhaps, but consider that our labour force -- which is the combined number of employed and unemployed British Columbians -- over the same period has gone into reverse.

It's hard to believe: despite adding tens of thousands of new residents over the last four years -- albeit at a slower pace than the country as a whole -- the number of British Columbians with a job or searching for one actually fell.

It was profoundly different across the rest of Canada as the nation's labour force grew by almost 585,000 people between April 2011 and April 2015.

The upshot is that while B.C. four years ago was home to an even 13.0 per cent of Canada's labour force, today we're down to just 12.6 per cent.

Think about that for a moment.

If B.C. had the same proportion of the country's labour force as we did when Clark first occupied the premier's office -- 13.0 per cent instead of 12.6 per cent -- an extra 76,820 British Columbians either would be employed or looking for work in our province.

Those ‘missing' workers could be producing, providing and consuming -- even paying taxes!

Let's look in aggregate at the number of British Columbians who have a job. When Clark became premier in April 2011, there were 2,228,900 people working in B.C.

It's simple: B.C. is home to about 13.1 per cent of all Canadians, yet under Clark's stewardship we've created less than 4.6 per cent of the country's new jobs.

Let's now consider the employment scene from the perspective of full- and part-time jobs.

The comparable rise in full-time employment across the entire country between April 2011 and April 2015 was 647,600.

So, since the spring of 2011 and Clark's ascendance to power, we've created only 12.1 per cent of all new full-time positions in Canada.

And currently we have only 12.3 per cent of all full-time jobs in the country. Recall that our province is now home to 13.05 per cent of Canada's population.

It's much, much worse with regards to part-time employment.

On Sept. 22, 2011, about six months after being sworn into office, Clark unveiled her much ballyhooed "Canada Starts Here: The BC Jobs Plan."

"I'm optimistic," Clark burbled at a luncheon hosted by the Vancouver Board of Trade. "I'm optimistic as we look toward tomorrow."

She added: "I know that our province can lead this country."

There is no doubt that British Columbia could lead Canada in job creation, but it is equally certain that we are not.

After four years of dreadful economic mismanagement, it is beyond question that B.C. is trailing the country as a whole in employment generation.

The Clark Liberals either are oblivious to the empirical evidence, or aware but content to mislead British Columbians about their performance.

In February, the Speech from the Throne opened the current legislative session with the observation that "it is important for your government to have a plan, the BC Jobs Plan, to strengthen our diverse economy, and to stick to it with purposeful determination."

A week later, in his Budget Speech, Finance Minister Mike de Jong baldly declared: "With this budget, we are reaffirming our commitment to keep our province on the right track of expanded growth, opportunity and prosperity."

Stick to a demonstrably failing plan "with purposeful determination?" B.C. is on "the right track" with plunging job statistics and soaring numbers of people who either have abandoned the labour force or lost their part-time jobs?

It's going to take much, much more than a bicycle pump and a rubber patch to fix our deflating job market, badly punctured in four short years by the policies of Clark and the BC Liberals.