BC Place is failing to protect its workers from violence at the hands of rowdy sports fans and concert-goers, according to a WorkSafeBC report. 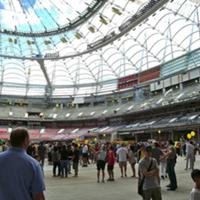 Accused of Sleeping on the Job, Fired BC Place Worker Ordered Reinstated

And the employees' union says action to reduce the risk is long overdue. Almost three years overdue, according to the Nov. 20 report.

"Having a violence prevention strategy in place should be bread and butter for a workplace that is structured in a way that BC Place is, holding large public events where emotions can run high," B.C. Government and Service Employees' Union president Stephanie Smith said in an interview.

WorkSafeBC, the provincial agency responsible for workplace safety, found BC Place had violated three sections of provincial Occupational Health and Safety Regulations. It gave management until Dec. 28 to comply with the regulations and ordered the stadium to minimize the risk of violence and train workers in dealing with unruly customers.

These policies and procedures were supposed to be in place almost three years ago and management has failed to provide adequate violence-related information and instruction to workers, the report found.

The WorkSafeBC report noted there had been violent incidents, including some that "resulted in workers requiring medical treatment."

BC Place hired a consultant to review violence in the stadium, but the report was not shared with workers or the union, WorkSafeBC noted.

BC Place is provincially owned and operated by B.C. Pavilion Corporation, a Crown corporation. A request to interview PavCo chair Stuart McLaughlin and CEO Ken Cretney was not granted.

Spokesman Duncan Blomfield said via email that management was "working to have the results of this assessment" -- the consultant's report -- presented to the health and safety committee within WorkSafeBC timelines.

Blomfield said the "instances of violence" referred to in the WorkSafeBC orders related to occasions where members of the public posed a risk to frontline event staff. "B.C. Place takes these matters very seriously," his emailed statement said.

WorkSafeBC defines violence as attempted or actual assaults or threatening statements or behaviour which gives the employee reasonable cause to believe that he or she is at risk of injury.

A violence prevention program should include a written policy, regular risk assessments, prevention procedures, worker and supervisor training and procedures for reporting and investigating incidents, according to the agency.

A WorkSafeBC inspection report says that according to joint health and safety committee minutes, the discussion about violence issues dates back to Feb. 18, 2011. The "target completion date" for dealing with the issue was originally December 2012.

The minutes from October's meeting have no target completion date for dealing with the issue and say only that the committee will "Continue to track progress."

Smith said the BCGEU is sending its occupational health and safety officer to a Dec. 18 meeting with the BC Place joint committee "to see what we can do to put the pressure on PavCo."

BC Place, which holds 54,000, is the province's biggest licensed drinking establishment and home to the BC Lions and Vancouver Whitecaps.

Several YouTube videos shot in fall 2011, when the stadium reopened from a $514-million renovation, show fighting among fans at B.C. Lions' games.

The stadium's biggest incident of violence occurred during the Aug. 15, 1998 American Bowl NFL exhibition between the Seattle Seahawks and San Francisco 49ers. Around 45,000 fans attended the game on a muggy Saturday afternoon.

Problems started at a pre-game tailgate party sponsored by Budweiser. There were long lines at beer stands and binge drinking inside the stadium during the game. Stadium security, ushers and police had to deal with mass-fights that broke out in different parts of the stadium and the atmosphere was described as a near-riot.

"The instigators were decked out in Hooter Rooters T-Shirts," wrote Vancouver Sun columnist Greg Douglas at the time.