A two-month-old letter from a First Nation that said granting an environmental assessment certificate to Woodfibre LNG would be a "legal error" was finally published after the BC Liberal government gave approval in principle to the project on Oct. 26. But it's unclear whether the First Nation's concerns were ever addressed. 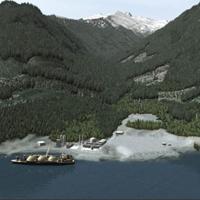 The Aug. 18 letter from the Tsleil-Waututh Nation's chief negotiator to Environment Minister Mary Polak and Natural Gas Minister Rich Coleman urged the government not to issue the certificate before undertaking additional studies and assessment work.

"At this moment, the (Environmental Assessment Office's) assessment of the project is legally deficient, and B.C. has failed to discharge its legal and constitutional duty to consult and accommodate the Tsleil-Waututh Nation," said the 15-page letter, signed by Treaty, Lands and Resources director Ernie George, and published on the office's website.

"It would therefore be a legal error for you to issue an (environmental assessment) certificate for the project now. Doing so could jeopardize the regulatory approvals process for the project, and ultimately the project itself."

The letter said the project, a $1.7-billion liquefied natural gas processing and export facility planned near Squamish, B.C., has the potential to cause adverse environmental, economic, social, heritage and health effects to the Tsleil-Waututh.

While George wrote that Tsleil-Waututh was not opposed to the project if various conditions were met, the nation wanted Woodfibre LNG and the Environmental Assessment Office to expand the study area to gauge potential impacts on the Strait of Georgia and Burrard Inlet, both within the traditional territory of the North Vancouver-headquartered Tsleil-Waututh.

"We applaud the (Environmental Assessment Office's) accommodation of Squamish Nation's title and rights, and do not raise this issue to suggest in any way that the measure taken by the office to do so are inappropriate," said the George letter. "Rather they should be encouraged and, in the context of this (environmental assessment), they should have been offered to us as well."

Asked on Oct. 28 about the published letter and whether Tsleil-Waututh's concerns were ever addressed, George said he would not be able to comment until this week.

"After talking with leadership, we have to get our ducks lined up in order to move ahead with this," George said. Later, he said: "There's been a death in the community and we have to deal with that first. It's more about prioritizing right now."

The day before on Oct. 27, the Tsleil-Waututh held a news conference to announce it would challenge the proposed twinning of the Kinder Morgan pipeline at Federal Court of Appeal.

In their Oct. 26 letter announcing approval for Woodfibre LNG, Polak and Coleman said that the province fulfilled its obligations to consult and accommodate Aboriginal people, but downplayed the concerns expressed by George.

The letter said the Tsleil-Waututh Nation proposed conditions that the Environmental Assessment Office considered during the assessment process and in the development of the certificate conditions.

The Squamish Nation Council, meanwhile, said it awaits further negotiations with the province. That First Nation's chiefs and council approved their own environmental assessment of the project on Oct. 14, without a vote by membership, after Woodfibre LNG agreed to meet 13 conditions, including a revenue-sharing deal.

Squamish Nation will not publish the assessment, according to spokesman Alex Rose. Chief Ian Campbell did not respond to an interview request.

Squamish Nation's in-house environmental approval only covers the conversion of the former pulp mill near Squamish into a liquefied natural gas plant, not the FortisBC pipeline that is proposed to deliver natural gas. Campbell said in an Oct. 28 news release that the provincial government must still negotiate with Squamish Nation and accommodate its interests.