It was just a small diagonal mark below the Conservatives' name on my ballot. Probably nothing significant. Likely a printing error. 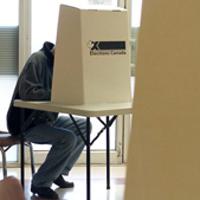 But amidst media reports of at least seven other instances of pre-marked ballots across Canada in Monday's election and last week's advanced polls, I didn't want to risk having my vote in Vancouver-Centre riding rejected.

On Monday, reports across the country ranged from fully marked "X"s in the voting circle beside Conservative candidates' names -- in Kitchener, Ont. and Fredericton, NB -- to more subtle marks near candidates' names in Winnipeg, Man.

In Amherst, NS, another voter said her ballot arrived with an "X" already in the circle, but she didn't specify for which party.

Meanwhile in last week's advanced voting, voters alleged receiving ballots already marked in Peterborough, Ont., Fredericton, NB, Kelowna B.C. -- where one voter claimed to have received two ballots in a row with marks near the Tory name -- and Vancouver, where a voter was issued a ballot with a "streak" that looked like half of an "X" near the Conservative candidate's name; when staff issued him a new ballot, that one had a similar mark but next to the Green Party candidate.

Elections Canada did not return an interview request Monday. But the agency's guidebook for poll employees states electors are allowed to request one replacement ballot if theirs is spoiled. A spokesman told CBC News that the problem was a printing error.

'It is an unfortunate error'

Duff Conacher, co-founder of Democracy Watch and a visiting political studies professor at University of Ottawa, said some printing errors would be expected.

"If you talk to anyone doing a print run of 26 million, you'll have problems," he told The Tyee. "But it is an unfortunate error to have.

"You have to have a mark only in the circle -- you're not allowed to write any other mark on your ballot. There can always be a challenge, and then there's a ruling. So it depends if there are scrutineers there from the party you voted for to challenge that ruling."

In my case, when I requested a new ballot, an Elections Canada employee suggested she initial mine instead, before another staffer intervened and urged her to issue me a new one. She did, and placed the pre-marked one into their spoiled ballot envelope.

A sheet of guidelines Election Canada provides to deputy returning officers shows examples of which ballots should be rejected and which accepted. That sheet allows ballots without the required "X" in the circle if voters instead put things like check-marks, coloured in the circle, partial "X"s or a circle. It instructs them to reject ballots, however, that have more than one circle marked, have numbers written in the circles, or have a candidate's name crossed out outside the voting circle.

Even in the Canada Elections Act, it's unclear whether a mark like the one on my ballot -- outside the circle to the right of candidates' name -- would have disqualified my vote had I cast it.

According to the Act, when votes are being counted the deputy returning office is to declare ballots "rejected" -- thereby untallied -- for a number of problems, for instance if no candidate's circle is marked, if more than one circle is selected, or if "there is any writing or mark by which the elector could be identified."

But with observers representing election candidates allowed to object to ballots as they are counted tonight, some have raised concerns that some voters could find their ballots deemed rejected if the deputy returning office agrees that a ballot is rejected.

The Council of Canadians' democracy campaigner Dylan Penner told The Tyee the organization had documented complaints of pre-marked ballots in media reports and through its online VoteWatch reporting tool in districts across Canada too.

"It looks like there have been reports of this in at least 11 ridings," he said. "We're tracking a range of different things people are reporting.

"Some further investigation will be needed, but we haven't heard any reports of any ballots pre-marked for Liberal or the NDP."

He said it's unlikely a small mark outside the voting circle would disqualify a vote, "but it would be erring on side of caution if people's ballot has any pre-marking to report it and ask for a new ballot."