While one veiled new citizen and the still-secret Trans-Pacific Partnership deal captured much of last week's headlines, Canada's major parties also finally released the full text of their party platforms. 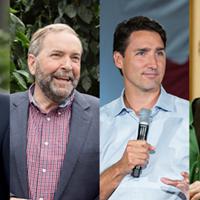 Where Do Major Parties Stand on Health Care? We Asked

Now that all four national parties have their pledges on paper, The Tyee dug into each platform and pulled out the issues our readers have ranked as their top priority this election.

If you're undecided or just curious, here's your chance to compare the pledges side by side before the Oct. 19 vote.

The New Democratic Party pledges to introduce a cap-and-trade program that allows provinces like British Columbia and Ontario to opt-out if their own carbon pricing exceeds federal standards. They also promise to:

The Liberal Party pledges to attend the UN climate conference in Paris, and within 90 days establish a new Canadian framework for combatting climate change. The plan includes plenty of money for "climate resilient infrastructure," promising to:

The Conservative Party platform reaffirms Canada's commitment to reducing greenhouse gas emissions 30 per cent below 2005 levels by 2030, a pledge made in May 2015.

The party aims to balance climate and economic interests and provide "support for companies and researchers to develop new, cleaner technologies."

The Green Party has laid out the most ambitious emissions targets of all the national parties. The party aims to:

The New Democrats have tackled inequality by proposing a $15-an-hour federal minimum wage and $15-a-day childcare, raising corporate taxes and closing tax loopholes to pay for the programs. On inequality, they pledge to:

The Liberals have focused on an income tax break for the middle class, while raising taxes on the wealthiest one per cent. Inequality platform highlights:

The Conservative platform aims to keep taxes low. To support families and seniors, the party also pledges to:

The Green platform focuses on replacing Canada's current poverty relief with a guaranteed livable income program, as well as implementing a national housing strategy. The Greens would:

The New Democrats have pledged a new "nation to nation" relationship with Indigenous communities, as well as a focus on implementing recommendations of the Truth and Reconciliation Commission. This includes promises to:

The Liberals have also committed to implementing recommendations of the TRC, as well as a new nation-to-nation process. They promise to:

The Conservative Party has affirmed its commitment to increasing funding for aboriginal education by 25 per cent. The party would:

The Liberals say a committee would review electoral reforms including ranked ballots, proportional representation, mandatory voting and online voting. The party would also:

The Conservatives would introduce legislation requiring any future government to hold a referendum on major electoral reform.

The Greens would replace Canada's first-past-the-post voting system with a form of proportional representation selected by an all-party committee.

The NDP platform reminds the public of various Conservative scandals during the 2006, 2008 and 2011 election campaigns. It promises to:

The NDP platform is the only one that also addresses digital rights and privacy, including mandatory reporting of data breaches and an increase to the Privacy Commissioner's enforcement power. The NDP says it would strike an all-party committee on privacy implications of the Internet of Things and end bulk data collection by Canadian agencies involved in cyber surveillance.

The first section of the Liberal platform, titled "A Fair and Open Government," is on this topic, promising to:

The closest the Conservatives get to this topic is near the end of the platform, on page 153, under "Protecting Canada's democracy."

It claims to be "one of the most accountable and transparent governments in the world" and that the Conservatives have been "relentless" in pursuing increased accountability. No examples are given.

It talks about the need to reform the senate and if it can't be reformed, then abolished.

The party platform promises generally to overhaul the Accountability, Conflict of Interest, Privacy and Access to Information laws and talks about the "need to act to diversify and enliven the media in Canada" to encourage an informed citizenry and healthy democracy.

The Greens want to enforce anti-trust laws to end corporate media concentration while reinvigorating the CBC. They would also slash government advertising and make all contacts publicly tendered "with decisions being removed from political operatives."

Infrastructure: Libs would run modest deficits to pay for $10 billion in new infrastructure across the country, including public transit.

Student debt: Greens would abolish tuition fees for students without financial means by 2020.

With files from Bob Mackin.