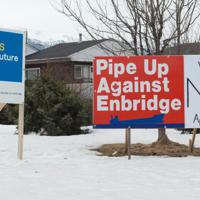 But flying just below the media's radar, another Kitimat battle is playing out in front of B.C.'s Environmental Appeal Board -- one that lawyer Chris Tollefson says may be the most significant case the board has ever heard.

Rio Tinto Alcan, the world's largest aluminum producer, and the B.C. Ministry of Environment are defending a permit that approved a $4.8-billion "modernization" of Rio Tinto Alcan's aluminum smelter. The upgrade will increase the plant's aluminum production by 48 per cent. The permit also gives the company permission to up its sulphur dioxide emissions by 56 per cent, from 27 to 42 tonnes per day.

Two elementary school teachers -- Lis Stannus and Emily Toews, an asthmatic -- are fighting the permit, arguing the increased air pollution unnecessarily threatens human health. The appeal, heard before a three-person tribunal from the Environmental Appeals Board, could overturn the permit or require Rio Tinto Alcan to install sulphur dioxide scrubbers.

Case records show the provincial government was aware of scrubbing technology -- used to eliminate sulphur dioxide emissions from smelters around the world -- but chose not to require Rio Tinto Alcan to put that technology in place. The modernization project, now 94 per cent complete according to Rio Tinto Alcan, remains exempt from provincial or federal sulphur dioxide emission standards.

Tollefson, the lawyer representing Stannus, argues the 2013 permit decision is the result of a too-cozy relationship between industry and regulators. "This case raises the spectre, in a very real way, of regulatory capture," he said in his opening statement.

The tribunal will decide on the appeal after hearing evidence presented by lawyers and representatives from all sides, including the B.C. Ministry of Environment, Rio Tinto Alcan as well as Stannus and Toews. Final arguments will be made in Victoria later this month. As the hearings wrap up in Kitimat, The Tyee breaks down three findings from the case.

Rio Tinto Alcan made an arrangement with the province to fund the position of a key B.C. Ministry of Environment official, Frazer McKenzie, who, along with his superior Ian Sharpe, aided the company during the permitting process, documents submitted as evidence showed.

The province argues the arrangement, known as a secondment, was not unusual and that support from Rio Tinto Alcan was needed to cover the costs of the lengthy and complex application.

Sharpe, manager of environmental protection with the ministry, told the tribunal "there was interest on both sides to enter into an arrangement where the company would provide funds that would cover the costs."

Daniel Bennett, legal counsel for Rio Tinto Alcan, told the tribunal "it is not uncommon for a major protect proponent that is seeking permit approvals to be required by the regulator to fund some aspect of the permitting process."

Sharpe testified he was not fettered in his decision making. But Tollefson argued years of emails, work journals and signed agreements entered into evidence tell another story.

Tollefson pointed to documents that show the ministry's ongoing concern with Rio Tinto Alcan's "comfort level" concerning sulphur dioxide regulations and how uncertainties over pollution limits could negatively impact investment in the project.

One internal correspondence presented by Tollefson read, "Alcan is anxious to get green light… to provide good news on project to stakeholders."

Under cross-examination, McKenzie read aloud from his detailed work journal, which referenced Rio Tinto Alcan's request to eliminate the mention of scrubbers from an internal memo. He also noted a phone call from a deputy minister who "did not want to let a little SO2 issue get in the way" of Rio Tinto Alcan's project.

Tollefson told the tribunal the evidence presented shows Sharpe's "discretion was fettered by pre-existing agreements between the province and Rio Tinto Alcan."

Bennett responded that McKenzie's role in the permitting process does not support an "allegation of fettering" and that Sharpe was not restricted in his decision-making concerning Rio Tinto Alcan's permit.

Sharpe testified he was advised by the executive level at the Ministry of Environment to make a final decision on the project before the B.C. provincial election in May 2013. Under cross-examination he said Rio Tinto Alcan expressed urgency for approval: "Their preference [for a permit decision] was sooner rather than later."

Sharpe approved the permit on April 23, 2013, three weeks before the provincial election.

Richard Overstall, counsel for appellant Emily Toews, said the evidence "shows how deeply comfortable government and industry are with one other."

A company spokesman declined to make a representative available for interview.

Eighteen months after the province approved Rio Tinto Alcan's permit, it released an environmental monitoring plan. According to the plan, if negative effects occur, the province has an ability to "adapt" rules or order "pollution mitigation" efforts -- like the installation of scrubbers.

Under cross-examination Sharpe said the adaptive management approach was something he "put forward to Rio Tinto Alcan to help them be more comfortable in this process." Sharpe said he did not know of any other cases where adaptive management was used to manage risks to public health. He added that, at his request, Rio Tinto Alcan built in space for scrubbers to be installed on a plug-and-play basis if needed.

Rio Tinto Alcan's lawyer told the tribunal that adaptive management "allows for appropriate corrective action to be taken" if needed to reduce sulphur dioxide emissions and that "without evidence supporting the need for a scrubber… such an order cannot be made in this appeal."

Tollefson estimates the cost of sulphur dioxide scrubber installations lands between $100 and $200 million, not including operating costs. He added the uncertainties about the project's health impacts "loom large" and that adaptive management is being used "as a justification by government to allow a proponent to avoid investing in proven technology that would eliminate identified health risks."

Overstall said that amount may seem high, but represents a small sliver of the project's multi-billion-dollar budget.

He said the evidence shows too many concessions were made to Rio Tinto Alcan. "They were persuaded to see it solely as getting the job done rather than including the protection of local residents and their environment."