The mayor of Squamish and her council will not support the proposed Eagle Mountain pipeline and Woodfibre LNG plant in the region unless 18 conditions are met, according to an April 30 letter to the provincial Environmental Assessment Office. 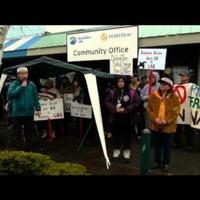 "Due to the significant outstanding information and the community concerns that have not been adequately addressed, and that there are no guarantees at this time that that they will be satisfactorily addressed, the current applications are not supportable by the District of Squamish," said the letter, signed by Mayor Patricia Heintzman.

The Woodfibre LNG terminal, planned for the site of a former pulp and paper mill seven kilometres west-southwest of downtown Squamish, would have a 250,000 cubic metre storage capacity and process up to 2.1 million tonnes of liquefied natural gas a year.

Owner Pacific Oil and Gas Ltd. is part of Indonesian billionaire Sukanto Tanoto's empire. Natural gas supplier FortisBC, which built a pipeline in 1990 for the Sunshine Coast and Vancouver Island, proposes a 52-km long, 20-inch diameter gas pipeline from north of the Coquitlam watershed to Squamish that would feed the plant.

Squamish council is already in a legal battle with FortisBC, which filed a B.C. Supreme Court petition in March, hoping a judge will overturn council's refusal to permit borehole testing for the pipeline.

The decision to say no to the projects could slow down the environmental assessment process.

The stakes are high for Premier Christy Clark's gamble to create a new resource export industry. Clark's BC Jobs Plan set a goal of three liquefied natural gas plants operating by 2020. If approved, Woodfibre could be the only new plant in service by the 2017 provincial election, and the only export facility in the populous Lower Mainland. (Fortis operates an LNG plant on Tilbury Island in Delta, for domestic use.)

Howe Sound residents are concerned that the plant would pollute the air and water, and an associated pipeline would ruin an estuary. The 300-metre-long LNG tankers that would call at Woodfibre would be nearly twice the length of BC Ferries' Coastal Class ferries that ply the Horseshoe Bay to Nanaimo route.

A key condition set in Heintzman's letter was for the Environmental Assessment Office to "require Woodfibre LNG, Fortis and BC Hydro to produce a cumulative impact presentation of all the elements that support the [plant] in order for the District to assess the impacts of the entire project on the District, and that the District be afforded the opportunity to comment to the EAO on the cumulative impacts prior to the issuance of any certificate."

Squamish wants the office to encourage the federal and B.C. governments to do more research into the potential harms of fracking on the environment and to enact tougher laws for natural gas extraction in B.C.

"These standards should include regulations that prohibit the use of potentially harmful fracking techniques in order to minimize or eliminate the harmful impacts of fracking on human health and the environment," said Heintzman's letter.

An attached report by the district said that Squamish was concerned with the potential harms to Howe Sound's marine environment from the seawater cooling system and impact of noise from the plant. It also said the social and economic impacts to Squamish are not clear, but there are potential negative impacts on the tourism industry.

"Squamish is at a crossroads," the report concludes. "The community's opinions and values on these projects are mixed; there are those who strongly support the tax revenue, jobs and other benefits and those who strongly oppose the project due to environmental, community and economic concerns. There are also those who are more divided and feel that the community needs industry, but that it should not detract from the values and existing businesses that make Squamish the place it is today."