Bidders at a recent charity auction had the opportunity to buy access to British Columbia cabinet ministers, courtesy of a lobbying company with close connections to the governing BC Liberals. 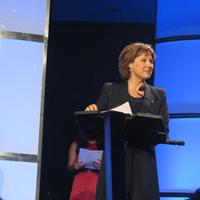 For BC Lib-tied PR Firm, 2013 Was Highly Lucrative

"Be privy to behind the scenes at the legislature," said the brochure description of the auction item offered to attendees at the Reach for the Stars Black and White Gala on April 25 in Tsawwassen.

"Meet a minister of your choice," the description said. "Have lunch with one or two ministers."

The fundraiser, emceed by Global BC morning news co-anchor Steve Darling, was for the Reach Child and Youth Development Society, a non-profit group that provides programs and services to children and their families in Delta, Surrey and Langley.

The auction item -- described in the brochure as "priceless" -- was donated by the Pace Group, a lobbying firm headed by Norman Stowe.

The package also included travel to the B.C. legislature via Helijet, introduction in the house and a chance to "meet the Press for Q & A."

"Two politically discerning individuals will enjoy a day of substance," said the brochure. "Travel there and back like a VIP on Helijet and enjoy breathtaking views of the lower mainland en route."

Reached on the phone, a Pace Group official was asked how the firm was able to offer access to the purchaser's choice of cabinet ministers. He said Stowe would respond, but he did not call back by publication time.

A Victoria advocacy group criticized the lobby group and the B.C. government.

"It's absolutely atrocious for a lobbying firm to think this is in its corporate self interest to do," said Dermod Travis, the executive director of Integrity BC.

"It's even more atrocious the B.C. government or the BC Liberal party would allow themselves to be put in a position where a lobbying firm was making such an offer," Travis said.

"The B.C. government has an obligation to ensure there's an adequate space between itself and people coming to lobby the government on specific files," he said, adding that the government's track record shows they have no understanding of what that space should be.

According to Pace Group's website, the company's many clients include the B.C. government, Helijet, the Business Council of B.C., Stantec, the Vancouver Convention Centre, the Vancouver Board of Trade, BC Place, BC Ferries, Translink, Steelhead LNG and the Aquilini Investment Group.

A spokesperson in the premier's office said he didn't know about the access prize.

A spokesperson for Reach said she didn't know who had bought the Pace trip to Victoria, but would find out and respond next week.

After the above story ran, Pace Group spokesperson Greg Descantes sent The Tyee an email saying the promise of a meeting with a cabinet minister was added in by an overzealous volunteer at Reach.

"I spoke to Norman [Stowe] and we most certainly did not promise any meetings with any ministers," Descantes said. "It seems a volunteer at the non-profit end simply added things to [the] auction item that we were unaware of. Had we known about it, we would of course have insisted it be removed."

He added, "As we regularly do, we were happy to support a local non-profit with their auction with return tickets to Victoria, but that was the extent of it."

Asked about Descantes' assertion, a spokesperson for Reach said she'd have to look into the matter.

Renie D’Aquila, Executive Director of Reach Child and Youth Development Society sent an email to The Tyee Monday afternoon, saying the auction prize that promised the successful bidder meetings with cabinet ministers was a mistake.

"We understand that the silent auction item that was donated by Pace Group does not include meetings with any government ministers," D’Aquila said. "This information was included erroneously in the description. The person who successfully bid on the item will be receiving a roundtrip on Helijet, tour of the Legislature and opportunity to observe Question Period. This was a gala in support of the Reach Foundation, which supports children and families in Delta, Surrey and Langley."